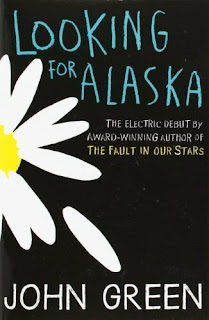 Green’s debut novel follows teenaged Miles from his home in Florida to Culver Creek boarding school in Alabama. He is unpopular but mostly unconcerned by this, preferring instead to stay in and study. He chooses to leave home in search of ‘the Great Perhaps’ and instead finds himself embroiled in pranks and falling in love with Alaska, a fellow student who is intelligent and fun but also deeply damaged by events from her childhood which manifest in erratic behaviour. The chapter headings ‘… days before’ and then ‘… days after’ mean you know something big is coming and can fairly safely assume it’s not going to be anything good.

Alaska is well known in the school and although she has her rivalries is generally looked up to. She is an expert prankster, supplier of cigarettes, provider of sex advice, and generally loyal. She hides the pain that sits just below the surface for the most part but lets it shine through in passing comments, for example, when she claims they smoke for fun but she smokes to die. Eventually she does reveal her trauma but instantly shuts down any further discussion, suggesting she wanted her closest friends to know but hadn’t quite figured out how to deal with it. Perhaps she was asking for help, hoping somebody would see beyond the banter.

This is a book of contrasts. On the one hand it is a boarding school book with all the pranks and mischief you’d expect. On the other it makes you think twice and consider how we can never truly know even those closest to us.
Posted by Ramblings of a nobody at 12:00