'Shades of Grey' by Jasper Fforde

I’ve been interested in trying a Jasper Fforde book for quite some time, they appealed to me greatly, I do know some people who don’t get on with them, but thought I’d give Shades of Grey a go. The first couple of pages were somewhat bamboozling, the kind of feeling you get at the beginning of a novel such as Nineteen Eighty-Four, Brave New World, or Oryx and Crake. It takes a little while to settle into the new world being portrayed in the novel, and get used to its various quirks.

Once I’d got past the initial disorientation, I thoroughly enjoyed reading this book. It introduces you to a world where the hierarchy is based on colour perception, and everything is quite strictly regulated. Some of the moral code may seem a bit historic, and the strict hierarchical concerns which decide who can marry who certainly seems to hark back to a previous era.

There have been a series of ‘Leapbacks’ whereby things have been lost, and the number of facts deliberately reduced. The library no longer holds many books, but the librarian proudly knows where they would all have been placed. This leads to some amusing confusion, Catch-22 being part of a series of fishing books, and such, which I’m sure many book fans will enjoy.

The utter dependence on the Word of Munsell raised some interesting ideas to me. In one of the Leapbacks the production of spoons was banned. Eddie, the main character, questions this, and is told that sometimes you just have to accept that Munsell knows best. As a Christian, I have often been faced with the idea that we don’t understand everything, and that a lot of it just comes down to faith. Reading this it seemed somewhat ridiculous, but it made it more apparent why so many people find it absurd when explanations of belief rest merely on the notion of trusting that you don’t know, but that there is a bigger purpose.

This book does suck you in, though it takes a while for the core of the plot to become apparent, it’s an enjoyable journey. There are moments that will make you laugh, but also parts which will cause strong feelings about the injustices being laid on some of the characters. The world in which it is set proves to be a lot more corrupt than initially seems to be the case, and it’s not until the very end that you discover the truth about which characters are to be trusted.

All in all a fantastic book which I would definitely recommend. Apparently the next one in the series is not out until 2013, which just seems too far away. In the meantime I will have to keep myself amused with some of his other novels, but I eagerly await his next offering in this series.
Posted by Ramblings of a nobody at 17:31 No comments:

Earlier this year I decided I would like to attempt to make my first ever gingerbread house over this festive period. I've been so busy with work that it seemed the possibility of this actually happening was fading fast, and then my rather lovely boyfriend bought me a copy of Baked & Delicious which came with a mould for a gingerbread house. I just couldn't resist, here's how it turned out: 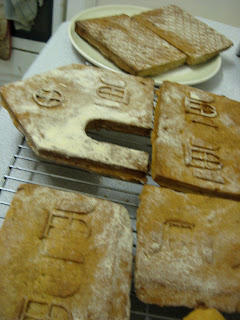 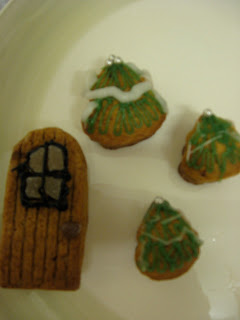 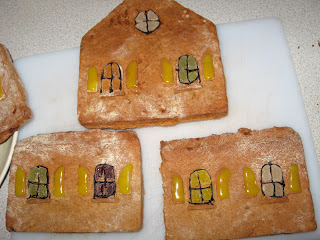 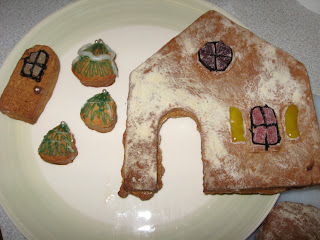 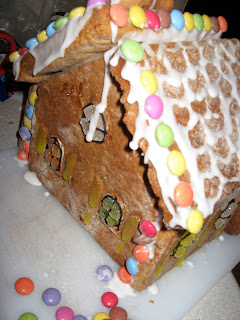 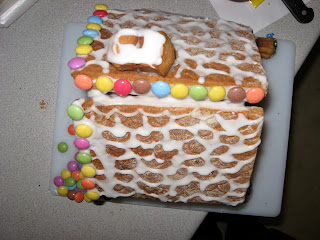 It was one of the most time-consuming things I've ever baked, I think I would have cried if it had all fallen apart at the last stage, and I now don't want to destroy it by eating it, but if you have time then I'd definitely give it a go. I thought I didn't have much to decorate it with, turns out I had quite a lot of potential gingerbread decorations tucked away in a box (I don't know about you, but I shouldn't be left alone in baking sections of supermarkets, or shops like Lakeland, my bank balance does not appreciate it!).
I plan to make another one in the future (though perhaps not turn it into the yearly practice that I thought it might turn into), but here are a few tips from my experience this year.
- Do as much of the decorating as you can before constructing the house, it's a lot easier, and prevents too much icing running down the side.
- Allow a whole afternoon, or more, to make it, so you have enough time for things to set properly.
- Use cans of food to hold it all together until the icing has dried enough for it to stand on its own (a second pair of hands comes in handy at this stage!).
- If you are making your own icing, make sure it's nice and thick so it doesn't do what some of my white icing did and run down the house, covering some of the other decorations.

All in all, have fun doing it. I'd love to see photos of other people's attempts.

If I don't post again before Christmas, merry Christmas to you all.
Posted by Ramblings of a nobody at 18:48 No comments: