Jo Wheatley, 'A Passion For Baking' 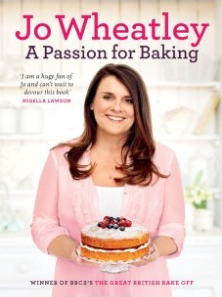 Reading through this, even before I'd tried any of the recipes,  I liked it. Jo talks about how important some of the memories she has that revolve around baking are, and how baking is a great way to spend time with loved ones. I completely agree with this, having many a fond memory of baking with my Mum and Gran when I was young. Her passion for baking really does shine through, and there's a real personal touch as she gives little introductions for each section, and recipes, telling the reader where the idea came from, which family members love it most, and her favourite ways of eating that particular bake. It's a very down to earth book, and any slightly unusual ingredients are accompanied by a suggestion as to where to find them, which is very much appreciated.
I admit when I was originally flicking through this book in the shop, trying to exercise some self control and not buy it I thought that perhaps the recipes were a bit basic, food that is in a lot of cookbooks, and perhaps I didn't need it after all. (I still bought it though, of course...). I couldn't have been more wrong. Yes, a lot of the recipes are for every day type foods, but they are absolutely delicious. And actually, I love the fact that they don't involve spending ridiculous amounts of money on ingredients you'll probably never use again, and which then takes most of your day to make something fancy. I've been baking so much more thanks to this book, and everything I've tried has turned out delicious.
The book has also introduced me to new food which I'd never even heard of before - singing hinnies which make a delicious breakfast, or afternoon snack, and stromboli which is a very tasty option for packed lunches. I feel like my everyday food has become a lot more tasty thanks to this book.
Another reason I love this book is because Jo gives suggestions as to how to eat the food, what goes well with the bake, and also some recipes for simple jams and sauces, a wonderful addition to an already brilliant book.

If you're looking for a book with easy to follow recipes, bakes that you can make reasonably quickly, and ones that will give you great ideas for every day rather than just for special occasions (though there are certainly recipes for that as well), then this is the book for you. I can't recommend it highly enough.
Posted by Ramblings of a nobody at 13:52 4 comments: