Behind the Scenes at the Museum, Kate Atkinson 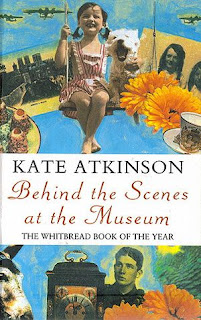 Behind the Scenes at the Museum is a family history told by Ruby Lennox from the moment of her conception, an intriguing opening that allows her to form opinions of her mother, being privy to her thoughts and feelings, before she is even born. She uses objects such as buttons and photographs to travel back in time to tell the tale of generations past in sections labeled as footnotes. The story does at times feel like a series of unhappy marriages and untimely deaths yet it rarely feels too heavy. Ruby is matter of fact about the deaths and often mentions them in passing many chapters before they are described fully.

Ruby lives with her parents and sisters in a flat above the family pet shop. Her mother Bunty struggles with the demands of motherhood and life with her adulterous husband, an unfortunately familiar situation for the women in her family. We are told of sweethearts lost to the war and women running away only to regret their separation from their children for the rest of their life. There are some truly heart wrenching moments and many comic ones including a disastrous trip to Scotland with their neighbours.

Jumping back in time frequently I did find myself losing the plot somewhat beyond Ruby’s immediate family. Keeping track of how all the characters are related would benefit from a family tree. Confusion aside, the footnotes used to flash back are beautifully constructed glimpses into events that could themselves fill a novel. They give a real sense of history repeating itself and the way the current family have been forged from historic trauma and dysfunctional relationships. An enjoyable read despite the excess of deaths, by the end you truly feel as though you’ve walked a life. 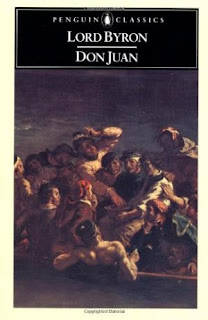 Byron’s unfinished mock-epic flips its hero’s character. In other famous representations Don Juan is aggressive and arrogant yet here we find a softer, more naïve manifestation. We are privy to his childhood and upbringing and the adventures he falls into – shipwreck, slavery, and war among them. With so much drama within it may come as a surprise that it is the digressions of the narrator that leave more of a lasting impression.

The narrator and Byron are hard to separate, expressing many of the same views. The dedication, which was suppressed at the time of publication, is a biting critique of many of his contemporaries – Southey who he suspected of spreading rumours about him, and Wordsworth and Coleridge who many of the younger Romantics believed had sold out, all come under his scrutiny. Each canto digresses into the narrator’s views on political and religious figures including women pushing for more independence. These tangents are so frequent that it becomes difficult to follow the thread of the tale of Don Juan.

It received a difficult reception on publication. Being published serially as was the norm at the time it fell to two separate publishers to continue to bring it to the public as the irreverent language and content put some off. Unsurprisingly, Wordsworth was not an advocate, but Byron’s friend Percy Bysshe Shelley believed it to be quite remarkable. Today, it is a book that students struggle through and not many choose as their entry into Byron’s work, as I did. Lengthy and rambling, you feel at times as though you’re sat next to a gossipy aristocrat at a dinner party. Interesting for its insights into Byron’s own life and opinions, it is at times enjoyable and at others a bit of a slog.
Posted by Ramblings of a nobody at 17:24 No comments: 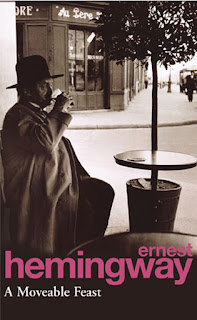 A Moveable Feast is a series of vignettes of Hemingway's time in Paris in the 1920s. It begins 'Then there was the bad weather' as though we have just stepped in mid-conversation and the reader is immediately swept into his world. He describes a happy time where he could easily spend a day writing in a cafe before going home to his wife Hadley, who receives much affection in this little book. They struggle to make ends meet as he tries to find his way as an author but they live well. He describes in detail his surroundings and those sharing the city from his fellow literary figures to the fishermen at the river. Life is described realistically and yet it feels as though everything is tinged with romanticism in this city that he so loved.

His portraits of other writers with whom he associated are often cutting and he does not hold back in his impressions. He writes of a disastrous trip to Lyon with Scott Fitzgerald to pick up a car in which he had hoped to learn much on the discipline of writing. Instead, he returns having spent more than intended and learnt only that Fitzgerald cannot handle his drink. We see many times on his journey to literary enlightenment his youthful naivety undone.

Written at the end of his life and published posthumously, it manages to retain a genuine feel, as though he had written it much earlier. He does not speak of the present but there are hints at his regret which can only have come with time. His reminiscences may also be coloured by the contrast of his state when writing and the happier times when he was on the brink of adulthood and success. A beautiful book that encapsulated the magic, creativity, and joy he felt in 1920s Paris.

'There is never any ending to Paris and the memory of each person who has lived in it differs from that of any other. We always returned to it no matter who we were or how it was changed or with what difficulties, or ease, it could be reached. Paris was always worth it and you received return for whatever you brought to it. But this is how Paris was in the early days when we were very poor and very happy.' - A Moveable Feast, Ernest Hemingway

Pick up a copy:
Foyles
Waterstones
Book Depository
Posted by Ramblings of a nobody at 18:32 No comments: 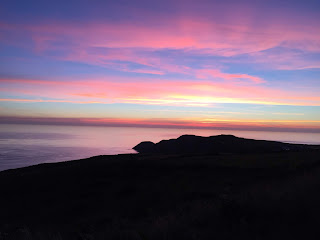 Thanks to a flat tyre en route, we arrived at YHA Pwll Deri just as the sun was beginning to set and the landscape was draped in a beautiful golden light. The hostel sits on the edge of a cliff on the Pembrokeshire coast and has one of the most stunning views of any I’ve stayed in. We spent a serene evening watching the sun gradually descend below the horizon and the sky transform into a pink and orange vision above the water. Other guests joined us in the experience, bringing to the fore the joy of youth hostels – community. 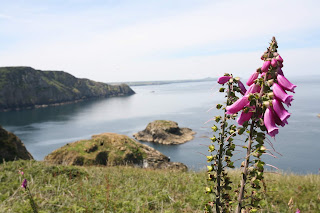 The next morning we eagerly set out to explore some of the walking routes shooting off from the front door. First we headed upwards, enjoying the panoramic views of the surrounding countryside and coastline. Following this we took the coastal path, a route that eventually leads to a lighthouse, a popular area with seals. We had to cut our walk shortly unfortunately as Snowdonia was calling to us. 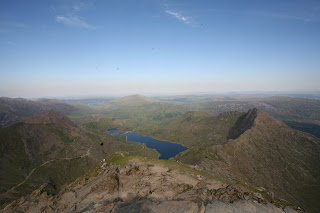 The next day held the biggest challenge – reaching the peak of Snowdon. A task that has evaded me on multiple occasions due either to ill health or dangerous weather conditions (even as a child attempting to reach the top via the mountain railway the fog was so dense it would not ascend fully). We chose the Snowdon Ranger Path as it is heralded as a good route for your first attempt, quiet and picturesque. Thought to be the oldest route to the summit, it rises swiftly to begin before a gentle section leading to the start of the steep climb, a relentless hour or so of ascent on loose grave before joining the Llanberis Path in a more gentle climb to the summit. It was 27 degrees on the day and with no relief of shade we were thankful for the presence of the café and the ability to purchase cold drinks. The railway and café do somewhat ruin the peacefulness that you find at other peaks however. Every half an hour or so a new train load of tourists unload and climb the few steps leading to the summit. Thankfully, we arrived between trains and so had a few moments of relative peace before the onslaught of tourists. 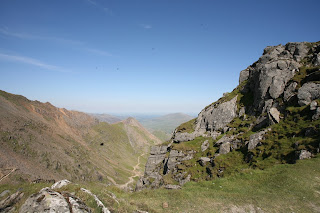 Once we were safely back at the base our next challenge was to find somewhere to refuel. All of the pubs we passed had stopped serving food and we had begun to think we’d have to go without when we found Y Sgwar, a lovely restaurant in Tremadog. I felt out of place in my dust covered boots and walking gear when all the other diners had clearly dressed up for their evening date. The staff didn’t bat an eyelid however and with good food and excellent service it was a lucky find. 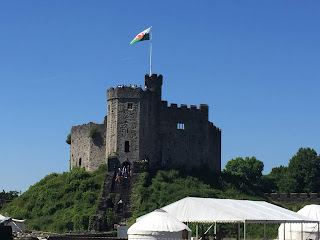 It was with a heavy heart that we began the journey home the following day. There was one stop still to make however, Cardiff Castle. Part Norman castle, part Georgian mansion, it made a fascinating break on a long drive. We enjoyed a tour of the areas once inhabited by the Marquess of Bute and his family with a knowledgable, friendly tour guide. The interior is lavish with no expense spared. The rooms are themed with inspiration taken from different countries, periods of history, and children’s stories. With the nationalization of the coal industry the Marquess decided to pass the castle to the people of the city of Cardiff after being in the family for two centuries.

The Norman castle still stands although it was damaged badly in the Civil War. The tower provides excellent views across the city. Furthermore, the walls of the castle were used during the Second World War as an air raid shelter. Visitors are able to walk the length of the tunnels, dark and unsettling with recorded air raid warnings playing.
Posted by Ramblings of a nobody at 16:46 No comments: