In the outskirts of Paris is the Parc Zoologique. Situated next to the Bois de Vincennes, a green space covering 995 hectares which is worth making a trip to explore even without the zoo. First opened in 1934, the zoo underwent a major refurbishment in 2011 to bring its environments up to the standards demanded by modern regulations. The result is a beautifully landscaped zoo with enclosures that feel quite natural. A large artificial rock dominates the skyline and teases with glimpses of stairs inside, not open to the public. They house animals large and small and have an impressive greenhouse to simulate a tropical rainforest environment.

The next day started with a trip to Galeries Lafayette Haussmann, an impressive department store opened early in the twentieth century. If you enjoy shopping you can happily spend hours browsing their upmarket wares, but even if not, it’s worth visiting for the beautiful architecture and stunning views over Paris from the roof.

After this we visited the Jardin des Plantes and found ourselves once again heading for a zoo. The menagerie is the second oldest in the world and parts of it do feel slightly run down. The enclosures are significantly smaller than those at the Parc Zoologique with a couple of animals showing signs of distress. Despite this they do house some big cats and the design of the enclosures allow for excellent views. Crowds were delighted to see baby leopards playing together.

The menagerie is located near the Seine and we took a pleasant stroll along its banks during the golden hour, many couples and friends enjoying the stunning surroundings with a bottle of wine. We arrived at Notre-Dame just before closing and with no queues. A service was in progress so we were unable to walk the full length of the building but we saw enough to be able to appreciate the majesty of the building. The crowds of tourists do make it hard to fully appreciate the intended peacefulness but that is to be expected of a trip to such an iconic building. Last time we visited we went up the towers and I would highly recommend this.

To round off the day we visited Shakespeare and Company, possibly the most famous English language bookshop in the city. The original, opened in 1919 by Sylvia Beach was frequented by the likes of Hemingway and Joyce. The current incarnation was opened in 1951 by George Whitman and continues the traditions of its namesake, welcoming authors and artists, and sometimes even housing them in exchange for work in the shop. Visiting today is a bibliophile’s dream with its many reading nooks, resident cat, and rows upon rows of books.
Posted by Ramblings of a nobody at 12:00 No comments:

The Day of the Triffids, John Wyndham 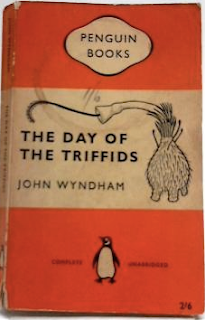 Bill Masen is hospitalized after a triffid attack, meaning he misses the meteor show that everyone else enjoys. His disgruntlement at having missed out soon proves misplaced as he discovers the widespread blindness that has occurred as a result. As he wanders the streets trying to work out what has happened he rescues another sighted person, Josella Playton, from her violent captor. It quickly becomes apparent that their sight puts them in danger and they make the difficult decision not to reveal their ability on grounds of self-preservation. All around are despairing, many preferring death to a life spent in darkness.

Other groups reveal themselves, each with their own ideas of how they should proceed, causing factions and separations. They try their best to survive with ever decreasing supplies and increasingly numerous triffids. There’s also a mysterious illness wiping out large swathes of the population that nobody is qualified to treat.

The book raises a lot of questions about humanity and our imagined superiority over nature. Previous to the disaster Bill had a colleague who believed triffids would take over if human sight was lost. It was our only advantage, and with the triffids already adapted to a sightless life they would have the upper hand. He was dismissed as having absurd ideas – imagine if the triffids had agency. The novel proves that they do, raising the question of how moral their treatment had been. It also leaves us with a sense that nature will survive long after humanity has exhausted itself, and that we will bring destruction on ourselves. Although written in 1951 this is a message that feels particularly pertinent today.

The writing is very much of its time and allusions to the Soviet Union as a place of mystery and secrecy play into the concerns of the day. The inevitable power struggle and attempts to give survivors something to believe in feels timeless however, and it is clear why this book continues to capture the imagination of its audiences.
Posted by Ramblings of a nobody at 12:00 No comments:

Initially lured to Bristol Botanic Garden by promise of their latest art installation, what I found was a tranquil oasis with a range of unusual plants. The explanatory signs placed around the garden explain the species unique to the area, far more than I would have imagined, and the various pollinators that keep plant species going. There’s also a Chinese Garden where you can learn about the medicinal uses of various plants, and greenhouses full of extraordinary species (including the biggest lily pads I’ve ever seen). Autumn is the perfect time to visit as the range of colours move from greens to yellows, oranges, and reds. It is a peaceful, beautiful place to spend a happy afternoon.

As for The Impossible Garden installation, well, it was a lot of fun. Twelve exhibits designed by Luke Jerram can be found around the garden, each aiming to stimulate discussion on visual impairment and perception. What has resulted is an entertaining yet meaningful display.  One moment you’ll find yourself in an Alice in Wonderland type dilemma, being dwarfed by a picnic bench, the next you’ll be tricked into thinking a sculpture is really an open doorway. Around the corner you’ll find yourself thinking about colour blindness or what it would be like not to be able to see in focus. The Impossible Garden is open until 25th November but whether or not you’re able to get there for it, the gardens are worth a visit any time of year.

While exploring the streets of Bristol and marveling at the mix of modern and historic architecture we happened upon the University of Bristol Theatre Archive. They welcome the public in to see displays of a selection of their material. At the moment they have an exhibition celebrating two hundred years of the London Old Vic and an exhibition curated by History of Art MA students on the importance of costume in performances by Laurence Olivier and Vivien Leigh.

Conveniently close by is Bristol Museum and Art Gallery. There predominantly for their unusual clown exhibition, we were first distracted by their Ancient Egypt gallery. A fascinating display on life and death in Ancient Egypt with some thought provoking interactive displays.

Clowns: The Eggs-hibition celebrates two hundred and fifty years of the circus with a display focusing on clown eggs – a unique way of ensuring the make-up and costume of established clowns are not copied. Clowns International started this practice over seventy years ago and each egg can take several days to paint. There are also displays of costumes and opportunities to try some clown tricks yourself. For those afraid of clowns this exhibition would be your worst nightmare but there is mention of clowns wanting to reclaim their image of fun rather than fear. Perhaps this exhibition will contribute somewhat, open until 6th January 2019.

Our final educational stop of the day was the planetarium at We The Curious, an attractions that looks fascinating. Planetarium guests can only visit the displays relating to space however, and although small it is packed with interesting facts and interactive opportunities. The planetarium itself is the only 3D one in the UK and on their night-time showings they have two different shows available. Unfortunately an uncomfortable experience (they’re having a refurbishment later in the year which will hopefully make things more comfortable), it was an interesting evening of learning about constellations and what we might have been able to see in the sky had it been less cloudy.

On our last day we drove over the famous suspension bridge to Ashton Court Estate. Covering 850 acres and with various activities from pitch and putt to mountain biking it’s bound to have something that appeals. Being on a budget we decided to take a walk in the deer park that offers panoramic views across the city as well as many deer. A pleasant end to the trip.
Posted by Ramblings of a nobody at 12:00 No comments:

Every October Montmartre hosts a festival celebrating the harvest of grapes from its one remaining vineyard. We were lucky that our visit coincided with this annual event as we were able to join a guided tour of the Clos Montmartre, closed to the public at other times of the year. There was a more formal celebration occurring at the same time with robed figures, members of the wine brotherhood of Montmartre as far as I could work out. The vineyard is small and not as historic as some may have you believe. Although vineyards were first introduced to Paris by the Romans and continued to thrive for many generations since, by the end of the nineteenth century they had vanished from the city. The Clos Montmartre was planted in 1933 to rekindle some of the area’s heritage.

After the tour we made our way uphill to the main festival site in front of the Sacré-Coeur. Here we found a bustling street food market selling a wide range of French specialities. The wine yield from the vineyard is auctioned off with proceeds going to charity. Local artists design the labels. Historically an area that attracted artists – Monet, Renoir, and Degas to name but a few, creativity is still evident as you walk the streets, and this custom pays homage to this. Montmartre retains its village feel and remains one of the most beautiful areas of Paris.

We couldn’t linger too long however as we had tickets for the Atelier des Lumières. A nineteenth century foundry in the 11th arondissement houses an immersive art exhibition. Their first display predominantly features work by Gustave Klimt, as well as some photography from the period and works by Hundertwasser, whose work was new to me. A playlist accompanies the experience as images are projected across the walls, floors and ceiling. Accused by some of pandering to the Instagram generation, it is nonetheless a unique experience. By no means a replacement for seeing the originals, instead it feels not like experiencing them so much as witnessing new art in this carefully curated space, and is well worth a visit.

Conveniently nearby sits sprawling Pere Lachaise cemetery. Established in 1804 by Napoleon I, it is the final resting place of many a famous name and is the most visited cemetery in the world. Rows of ornate tombs line paths that spread as far as the eye can see. It feels almost to be a city in its own right. Home to tributes to wars and mass killings, it is hard to imagine that this peaceful, emotive place was once the site of a massacre itself.
Posted by Ramblings of a nobody at 14:25 No comments: