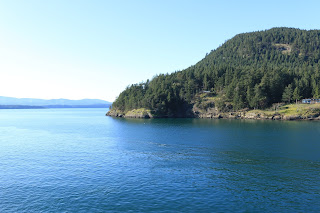 The hour and a half ferry journey from Tsawwassen to Swartz Bay passes pleasantly as you glide through a series of islands, offering stunning views, with mountains just visible on the horizon. On arriving, it is still an hour or so bus ride to Victoria itself, but for the curious first time traveller this is no great hardship, allowing you to see parts of the island you wouldn’t otherwise.

Darkness had already fallen by the time we reached the city centre, and what a pleasant experience to be greeted by the glinting of lights illuminating many of the buildings, especially around the marina – Parliament House taking centre stage. After wandering the streets of Downtown and getting our bearings we decided on the Bard and Banker for dinner. Named for the bank that occupied the building for many years, and possibly its most famous employee, Robert Service, a popular poet in the first half of the twentieth century. A beautiful interior and the promise of music every night makes this a great spot for a night out, and the food was some of the best we had on the trip.

The next day we set off into town without any grand plans, which resulted in a wander around the shops (and far too much money spent on craft supplies – Beehive Wool Shop and the Button and Needlework Boutique have such lovely things, it was too hard to resist). Munro’s Books proved an excellent place to pick up some homegrown fiction (still on the to-read pile – watch this space), and after all that shopping we were in need of refreshment. West Coast Waffles have a vast selection of waffles, and confirmed my new-found belief that savoury is actually preferable when it comes to waffles. They also serve delicious freshly made smoothies. It wasn’t a cheap lunch but it was satisfying. 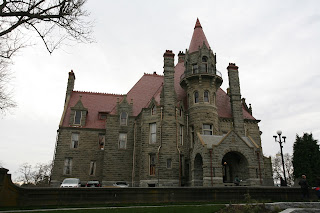 After all this indulgence we went in search of some history in the form of Craigdarroch Castle. A luxurious mansion built between 1887 and 1890, it stands proudly overlooking Victoria with the intention of reminding residents who was the richest, most important man in town. Robert Dunsmuir made his fortune from Vancouver Island coal, but sadly never got to enjoy his castle, dying in 1889. He left his entire estate to his wife Joan, which caused huge family rifts that lasted the rest of her life. James Dunsmuir, their last remaining son, cut all ties with the family business in 1910 and retired in his own grand house, Hatley Castle, on which more later.

The Dunsmuirs went out of their way to make Craigdarroch a symbol of their wealth, importing expensive materials from across the globe. Effort has been made to ensure the items within are appropriate, many having been owned by the Dunsmuirs even if not originally from Craigdarroch. For me the highlight was the beautiful stained glass windows throughout the house. 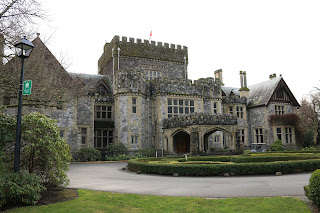 Hatley Castle was first on our list of places to visit the next day and so we piled on to several buses to reach Royal Roads University, in whose grounds it stands. Nestled in trees and surrounded by formal gardens designed to give the impression of inherited English grounds, it is a pleasant place to be. Unfortunately, it was not open to visitors when we visited so could only enjoy the exterior. From 1940 it was used for naval training, but is perhaps best known today for its appearance in a number of blockbusters, perhaps most famously as Professor Xavier’s School for Gifted Youngsters in X-Men, and most recently in Deadpool. 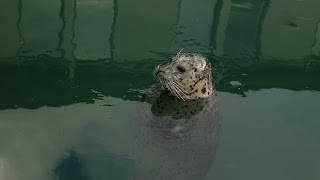 Our final stop of the day was Oak Bay Marina. A peaceful place with lovely views of Mount Baker, although let’s be honest, it’s the sea lions that really capture your attention.
Posted by Ramblings of a nobody at 19:51 No comments: 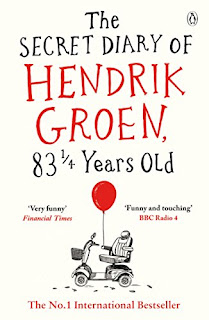 The Secret Diary of Hendrik Groen, 83 ¼ Years Old is a fictional diary of octogenarian Hendrik Groen, resident of an assisted care facility in Amsterdam. He is exasperated by other residents who want only to discuss their ailments and the hard lot of the elderly as they wait for their next meal. He has little time for the management of the home whose rules are often arbitrary and who refuse to allow the residents to see the regulations. Thankfully for his sanity he finds a group of like-minded individuals with whom he forms the Old But Not Dead Club. They take it in turns to organise days out for the group, giving them something to look forward to and causing resentment among the other residents. By the end of the novel the club is struggling with a stroke, amputation, and the onset of Alzheimers for some of its members. It is heartening how they rally together but painfully honest in its depiction of life for the older generation.

The tone is generally light-hearted as he describes the small events that get blown out of all proportion, often sparked by his mischievous friend Evert. Hendrik purchases a mobility scooter at one point, but not before careful consideration. It becomes something of a status symbol and a point of amusement to the others when he receives a speeding ticket. Underneath the humour however is a heartfelt thankfulness for the freedom it provides, opening up the city to him once more.

He comments on the way the female residents fawn over any fresh male blood as there is such a shortage, and how those whose husbands are still with them guard them jealously against the advances of the others. Hendrik is not without his own flush of romance however. When Eefje moves in he finds himself taking extra care of his appearance. Their friendship grows and their sweet closeness makes him wish he’d met her much earlier in life.

A humorous, thought-provoking tale of a man making the most of old age. Nothing is too small or big an issue – from the cliques that form in the care home to the question of euthanasia. Hendrik is a likeable narrator who may not be a fan of the elderly in general but who cares deeply for those closest to him.
Posted by Ramblings of a nobody at 15:37 No comments: 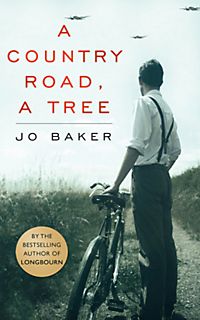 A Country Road, A Tree is Baker’s fictionalized version of Samuel Beckett’s life during the Second World War (though she does not name him in the novel, so you’d be forgiven for missing this). It focuses mainly on his time in France during the Nazi occupation of Paris. We are witness to the privations of the characters and the atmosphere of fear, with people vanishing in the night. Beckett joins the Resistance and flees the city with Suzanne, his lover. It can never be forgotten that he chose to be in France during this difficult time rather than remain in the safety of Ireland, his homeland.

It is clear from the start that he finds Ireland claustrophobic and that it inhibits his ability to write. It is also apparent that his mother feels great terror, understandably, of him being in harm’s way. There is a short scene in Spring 1919 where he has climbed a tree that he knows he’d be in trouble for, mostly for having done something dangerous. This feels poignant as the reader knows the bulk of the novel will be set in World War Two, and indeed, he choses to place himself in the midst of the danger.

We see Paris in various guises – the vibrant, creative city that it is famous for being, and the austere version of war-torn Paris where deprivation is rife and a sinister imprint of Germany hangs over it. It is, however, where he feels more free, even if his friendship with James Joyce does stifle his creative confidence. There’s also the strain that we see rationing put on his relationship with Suzanne, especially so when he gives away his own meagre rations. He also causes her additional problems in his continued involvement with the Resistance. It’s an interesting relationship that is stretched to its limits as they flee the capital, but always it’s not quite conceivable that they wouldn’t be together.

Baker’s attempt to show how the war has shaped Beckett into the author he becomes follows the facts of his life fairly carefully, but does assume some existing knowledge. It has the potential to be a gripping tale but it just didn’t really engage me as much as I would hope.
Posted by Ramblings of a nobody at 18:03 No comments:

We arrived in Vancouver to such rain fogged weather that it was only when we saw the lights on the runway that we caught our first glimpse of Canada. It took a few days for the weather to improve, but undeterred we set out for the University of British Columbia with the aim of visiting the Museum of Anthropology. The University itself is so vast it feels likes it own town, and no doubt has some gorgeous views of the North Shore mountains on clearer days. 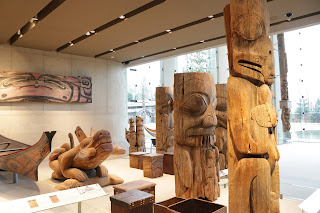 The museum houses an impressive array of works by First Nations people of the Pacific Northwest. The Great Hall greets visitors and is a breathtaking space that feels light and spacious and is filled with huge totem poles (a misnomer, as our tour guide explained), feast dishes and canoes. We were lucky to end up on a guided tour of the galleries, which I would highly recommend to any visitor, and were shown how to identify some of the creatures featured in the objects. The whole museum is not exclusively such large objects however, other galleries are full of smaller treasures, and one is even dedicated to ceramics (which admittedly feels a tad out of place). 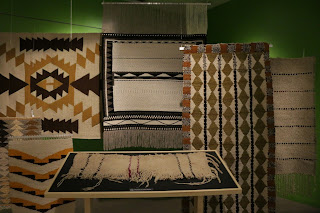 The temporary exhibition, The Fabric of Our Land: Salish Weaving showcases beautiful woven blankets from the 1800s and modern variations made by today’s weavers. It was a moving exhibition, reading about how important the finished article is and the amount of conscious love that goes into the creation. Truly inspiring. 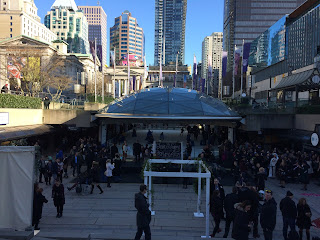 A few days after this we experienced Pop-up Wedding’s Love in the Square – an incredible celebration of love which this year saw 151 couples tie the knot. Robson Square was transformed for the day with temporary altars set up and queues of brides and grooms waiting their turn. Some came dressed to the nines with large groups of loved ones to celebrate with, others kept it more low key and intimate, but everyone was having a great time. It was a wonderful event to be part of.

We stayed in an Airbnb just off East Hastings, which we’d been warned to be careful about, but we were far enough along not to worry. It proved an interesting place to be with an eclectic mix of shops. Of course, I couldn’t resist visiting the local yarn shop, Baaad Anna’s, which offered a range of luxury yarns and some helpful and friendly advice. Another highlight was Pacific Bread Company. Sandwiched between a 7eleven and a takeaway pizza place you may not expect much, but it is a treasure trove of beautiful patisserie (and offers delicious grilled cheese sandwiches if you need a break from the sugar). Scandilicious also also proved a great breakfast spot, and judging by how busy it was, I’d say we’re not alone in thinking this.
Posted by Ramblings of a nobody at 14:09 No comments: