Seven Ages of Paris: Portrait of a City, Alistair Horne 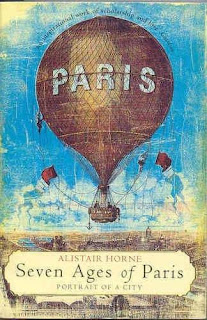 Great affection for the City of Light runs through this biography by one of Britain’s foremost historians on the topic. He delights in the culture and glamour of the city while not failing to make quite clear what a turbulent history it has survived, a fact Horne seems to consider makes it that much more exciting than our own capital. He admits in the preface that the seven ages have been chosen capriciously and yet they offer a vast history from the Middle Ages to the mid-twentieth century. A whirlwind tour it may be but with enough attention lavished on each epoch that you don’t feel lost. Its ambitious span allows for themes and recurrences to be easily identified.

It is, predominantly, a history of the upper class and those in power, the average Parisian only getting a look in as part of a statistic. Horne has no qualms in expressing his distaste or favour for those he writes about. His focus is also on the way each ruler impacted the very fabric of Paris. Mass building under the likes of Napoleon, an often-absent leader who nonetheless ruled with great attention. Some ages saw great expansion with little to no care for existing buildings. Interesting also to see the buildings we are so familiar with – the Louvre and Versailles for example, change roles so drastically. What is now home to the world’s largest art gallery was once home to French royalty and the fate of Versailles from pleasure palace to dreadfully boring under the Sun King as the young and fashionable moved back to the city centre. It is interesting to see the centre of power move through the ages and the emphasis on different disciplines such as education or religion as evidenced by the buildings erected.

The lingering impression of Paris remains one of high culture and beauty but of a city that has earned its battle scars. Invasions and revolutions are no stranger to the French capital and Parisians through the ages have suffered terrible hardships because of them. This easy to read history will leave you with a greater appreciation of the flourishing city born of so much turmoil.
Posted by Ramblings of a nobody at 12:00 No comments:

Apple and Blackberry Upside Down Cake 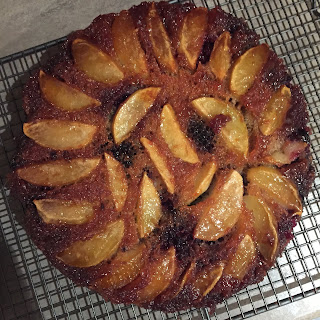 Over a high heat add the sugar and three tablespoons of water in a pan and cook until the sugar has melted and turned amber. Do not stir.

Remove from the heat and pour into the lined baking tin, making sure to cover the base completely. Arrange the apples on the caramel., taking care not to burn your fingers.

For the sponge, in a mixing bowl beat the sugar and butter until light and fluffy.

Mix in one egg at a time.

Fold in the flour and bicarbonate of soda. Mix in the milk and vanilla extract.

Sprinkle the blackberries with a little flour and gently stir in. Pour the mix into the prepared cake tin, spreading the mix carefully.

Bake for 50-60 minutes or until a skewer inserted into the middle comes out clean.

Using oven gloves, place a cooling rack over the tin and flip, taking care of any leaking sauce. Remove the tin and leave to cool. 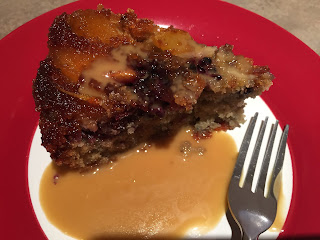 To make the toffee sauce, gently heat the cream in a saucepan. Whisk the butter and sugar into the cream until melted and then whisk in the treacle and syrup. Drizzle over the cake and enjoy.
Posted by Ramblings of a nobody at 12:00 No comments: