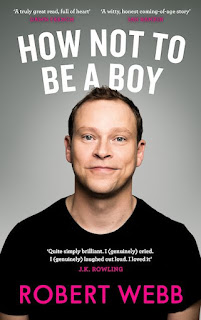 Robert Webb spoke openly about childhood and the difficult relationship he had with his dad for most of his life. He commented on the gender stereotypes that can be so damaging to the male mind and how he saw three times over the regret of having missed out on love, friendship, and joy because of them.

The title of his memoir, How Not to Be a Boy, hints at his struggles with the idea of masculinity and naturally the conversation focused on this. He did however also talk about the fact he knew from a very young age what he wanted to do with his life, and despite his shyness was incredibly ambitious. That he has achieved 90% of his childhood aims is heartening and goes to show that no dream is too big. 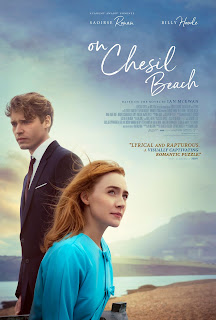 Literary royalty in the form of Ian McEwan was next on the line-up. Ostensibly there to talk about adapting On Chesil Beach for film, we were also treated to a look back over his career and a reading of a recent, unpublished short story. He spoke of how as a young writer he thought British literature provincial and tame and aimed to shock (though he always denied this when suggested by journalists).

It is important, he believes, not to confuse books such as On Chesil Beach with sociology. They are about particular characters, not representative of all of Britain in the 1960s. Bringing the book to the big screen took several years and two different directors. McEwan believes this to have been a blessing as it meant Saoirse Ronan was the right age to play the lead by the time filming began. He also spoke of enjoying being able to add scenes that perhaps he wished he’d put in the novel.
Posted by Ramblings of a nobody at 16:54 No comments: 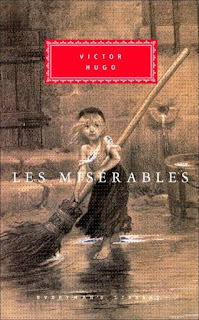 Rain clouds loomed menacingly over the Hay Festival this bank holiday, but it did not dampen the spirits of the bibliophiles rifling through books and crowding into tents to listen to thought provoking talks. My first event was Andrew Davies discussing his current work in progress, an adaptation of Les Miserables. I don’t know if I’m the only one, but I book my tickets in a fit of enthusiasm and by the time the festival arrives can remember only what a handful of the events are about. This leads to some nice surprises when the event gets underway.

Davies spoke of his background in teaching and his passion for conveying the joy of literature to others. In adapting so many classics he has continued to do this on a much broader scale. When asked how he goes about adapting such epic tomes as Les Miserables he spoke of boiling them down to their essence, finding the main themes which then allows you to know what you have to keep in. Les Miserables being a complex tale with  many tangents and jumps in time he decided to rearrange events to show them in chronological order. Currently filming on location in Belgium and due to air early 2019, it’s sure to be one to watch.

Next up was Tessa Dunlop discussing her book The Century Girls, a study of six centenarians’ lives. 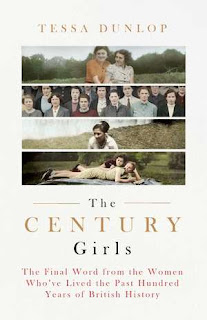 We had the added treat of one of the ladies, Helena Jones, on stage with Dunlop. Naturally the focus fell on Jones’ story but the other subjects were mentioned where appropriate. What came across strongly was how important family duty was when she was a young woman, keeping her eventual husband waiting six years so she could help look after a younger brother. It is clear that she was always an active, hardworking member of her community and that she reveled in her work as a teacher, which she successfully juggled with household duties and a number of community projects. She remains a well known figure in Brecon and at almost 102 is going strong, delivering two poems from memory for us.

Dunlop highlighted how innocent young women were in the early twentieth century, their mothers not explaining the facts of life to them leading to some alarming situations. What was also painfully apparent was the dearth of men after the war, which meant many women remained unmarried and childless. The thoughtful sentiments of one of the other subjects, that there’s no point worrying about what you don’t have but rather appreciating what you do, is advice that perhaps we should all try to live by.

Rounding off the day was Rowan Williams and Dr Hannah Critchlow discussing consciousness. They talked of the difficulty of defining consciousness but came to an agreement that it is the ability to form your own unique view of the world. They also pointed out its relative infancy and its relevance as something that works for us. The need for a sense of agency has been proved by studies mentioned by Critchlow whereby taking away a sense of free will led to people behaving much more selfishly.

We also had the unusual experience of seeing Rowan Williams’ brainwaves being measured during the conversation, physical activity, and meditation.
Posted by Ramblings of a nobody at 20:52 No comments:

It was with a heavy heart that I left Lumb Bank after an incredible week of Starting to Write with the Brontës. Breaking the Arvon formula somewhat, we didn’t spend the whole week in workshops at Lumb but took two days in Haworth. The first of which consisted of a visit to the parsonage, workshop exercises based around what we’d seen, and a private tour by the expert Ann Dinsdale. We all took a lot away from the day having gained a better understanding of how the Brontës lived and worked, and for me it brought to life some of the characters around them. The second day trip saw us out on the moors hiking up to Top Withins. We stopped at various points en route to read out poems and snippets from novels that were inspired by the landscape, a truly special experience that I would highly recommend.

Our days at Lumb consisted of morning workshops split between poetry with Katrina Naomi and prose with Tiffany Murray. They were wonderful, very approachable tutors who got us thinking about our writing in different ways and equipped us with various techniques to get our creativity flowing. We were also given one-to-one tutorials with them both. For someone like me who finds sharing their work excruciating it was nerve wracking but well worth it.

In keeping with Arvon tradition we spent Friday night sharing work we’d produced during the week, having been treated to readings by our tutors and special guest Claire Harman throughout the week. I think it’s fair to say we were all apprehensive at the prospect of reading out our work but it was a great end to the week, and unexpectedly it was poetry that I shared, the first of my adult life.

I cannot fault the week – the location is breathtaking, the staff and tutors were great, the special guest was entertaining and incredibly knowledgeable, and we were kept well fed with delicious fresh food. If you ever have the chance to experience an Arvon course take it, it’ll be one of the best things you ever do.
Posted by Ramblings of a nobody at 18:27 No comments:

Meet Earnest Hemmingway, aspiring writer and recently unemployed singleton who is plagued by a name that sounds the same as the famous author’s, whose writing, incidentally, our Hem can’t stand. With his sudden abundance of free time he decides to finally crack on with that novel he’s been working on for years. Unfortunately, he has sudden, crippling, writer’s block which he blames on the ghost of Hemingway.

After a very public breakdown, which naturally ends up online and goes viral, he starts a support group for others suffering with famous names. He finds an enthusiastic group who encourage him to go on a trip they call the Ernest Hemingway Exorcism World Tour – visiting the places he lived and worked in the hope of moving past his creative block. Various of his group members, including Professor James Moriarty and Marie Antoinette, offer to accompany him on some sections of the trip and we see them grow closer during their time together.

Alongside this storyline runs that of his father’s determination that he take over the family underwear business. He is the fourth Earnest Hemmingway of the family as the first-born son and it is seen as his duty despite his complete lack of interest, and the presence of his willing and able sister Sarah.

A lighthearted tale that discusses the pressure of family expectation, gender discrimination, and responsibility. Hem comes across as kind and generous with his friends, but many of the characters seem to lack any real depth. A lighthearted book that’s perfect as a holiday read.
Posted by Ramblings of a nobody at 21:04 No comments: