'Before I Die Again' by Chad Varah 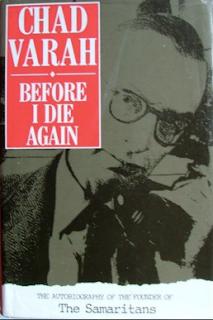 I admit I picked this up because I wanted to learn about the founding of the Samaritans, but I was pleasantly surprised to find the whole book interesting and well written. Chad Varah certainly had an interesting (and incredibly busy!) life. From the start it is obvious he is very clear on what he believes and isn't going to make any apologies for that.

As a clergyman some of his views may come as a surprise to many readers. I think he had it spot on in his interpretation of Christianity though - focussed entirely on love, and not following prejudices and discriminations that have sadly been present for many believers throughout history. His acceptance of homosexuality, and openness in talking about sexual issues may not seem such a big deal today, but when the Samaritans was founded there was far less understanding and discussion of such issues. He writes about how the kinds of problems people contact the Samaritans about have changed as society's attitude has changed over time.

Once the Samaritans began to grow it seems his life was pretty much non-stop. He lived a remarkable life and travelled the world (several times over!) but there's a humility obvious, and a real appreciation of the hard work and commitment of all the volunteers. This really is a brilliant read. Surprising, funny, moving, and, above all, inspirational.
Posted by Ramblings of a nobody at 21:50 No comments: 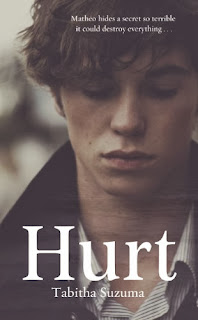 It's difficult to write a review of this without giving away the story. Mathéo is a talented diver training for the Olympics, is popular, wealthy, and has a beautiful girlfriend. It seems like he has it pretty good, and then, one weekend, everything changes. He comes back from a diving competition knowing he's done something terrible but with no recollection of what. All he knows is that it has changed him forever.

He becomes withdrawn and moody, and even violent on occasions, confusing those closest to him. I've never found an author who writes emotion as well as Suzuma, she draws you in to the thoughts and the feelings of the characters so that you feel it with them. Mathéo's growing sense of isolation and frustration is wonderfully constructed. There's also the juxtaposition of his relationship with his family, one where he rarely spends time with his parents, and the times where the family get together are tense and stressful, and that of his girlfriend Lola's with her father, a loving, comfortable relationship. And that's not to mention the chemistry between Mathéo and Lola. Even though it becomes strained and confusing due to his terrible secret, the love is palpable.

There are two big reveals in this book, the second certainly took me completely by surprise. Suzuma keeps you guessing for most of the book, and it hits hard when all finally becomes clear. Her books should come with a warning - likely to break your heart. She yet again had me in tears (so maybe not one to read in public). I urge everyone to read her books; they draw you in and play with your emotions, and if you haven't discovered her yet, you're missing out. In saying that, I don't think Hurt is her strongest book (but that's no great criticism as some of her others rank amongst my all-time favourites). Some of the descriptions and metaphors are repeated a bit too often, and because you don't know what's going on with Mathéo for most of the novel there's a slight block to the reader's connection with him. It's still definitely worth a read; Suzuma deals with issues that don't often come up in YA fiction in an honest, considered manner, and although Hurt has a slightly different style and structure to her other novels, it's brilliant and moving, and oh so very emotive.
Posted by Ramblings of a nobody at 23:24 No comments:

Secrets of the Royal Bedchamber at Hampton Court Palace 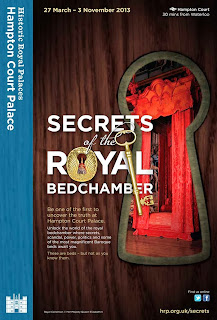 The first room you walk in to is covered in mattresses, a film projected on the ceiling. After tentatively shuffling in to the room it’s clear you really are meant to lie down. A rather fun, novel start to an exhibition, and actually very effective. Lying there watching the film I felt the outside world fade away as I gazed up at the ceiling, being drawn in to the world of the exhibition I was about the enter.

First you are introduced to the royal bedchamber with items that belonged to Charles II, the idea that royal bedchambers were far from just places to sleep. There were some famous portraits on show, and some intricate pieces of silverware, as well as some quirky and unusual objects. The rest of the exhibition takes you through several monarchs, bed by bed. My favourite was probably Queen Charlotte’s for the embroidery alone – it was stunning! It was interesting to learn how important the royal bedchamber was, and how many controversies centred around it (and to see the beds where they took place!).

As always, Historic Royal Palaces put on an interesting, visually impressive exhibition. One room contained mannequins in paper(?) dresses that, although not historic, were incredibly impressive. One of the things I love about their exhibitions is the innovative way they present history, and the aesthetics of their displays, a treat in themselves. There were so many displays I wanted to take photos of but alas, it was not allowed.

The final item, a beautifully intricate key, serves as a reminder that to have access to the royal bedchamber would have been a great privilege, and that what we’ve just seen is something quite special.

The exhibitions runs until 3rd November, and it’s definitely worth a visit. For more details see here.
Posted by Ramblings of a nobody at 22:32 No comments:

'The Night Circus' by Erin Morgenstern 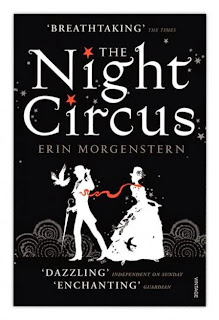 Welcome to Le Cirque des Rêves. A black and white circus which appears with no warning, opens only at night, and where you can feast your eyes on many a wonder.

We meet Celia and Marco as children. Celia, the daughter of a famous magician, and Marco an orphan taken in by a mysterious man in a grey suit. Their lives are entwined from a young age when they are entered in to a mysterious, seemingly somewhat sinister challenge by their guardians. We see them grow in their very different, albeit both oppressive bordering on cruel, upbringings as they are trained for the challenge they know so little about. They meet years later at Le Cirque des Rêves, which will become the venue for their challenge. As they struggle to comprehend the rules of the challenge the reader realizes they are hurtling toward tragedy – made all the more devastating by the characters’ obliviousness to their future.

The circus itself attracts many followers, and the reader is drawn in to the lavish, magical world it holds. Although there are complications and danger within, I defy anyone to read this book without falling in love with it.

I’d heard only great things about this book and so my expectations were high. I wasn’t too sure to start with – it was good, but some of the dialogue felt a little awkward, and I didn’t feel completely immersed in the world. And then it got me, and I was gripped to the very end – navigating my way through a host of intriguing characters whose lives were intrinsically linked with the fate of the circus, mystery, revelation, magic, and descriptions that transported me to another world.

It felt like a long time since I’d found a book that completely drew me in, kept me up at night, and stayed with me after the last page. The Night Circus did all these things. It was with a sense of sadness that I, as the reader, was led out of the circus, but with characters so well drawn they are still vividly alive in my head.

Pick up a copy:
Foyles
Waterstones
Book Depository
Posted by Ramblings of a nobody at 22:12 No comments:

'Blue Stockings' by Jessica Swale at The Globe Theatre 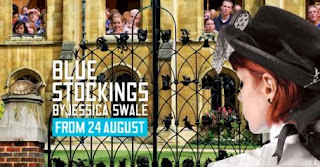 The year is 1896 and the ladies of Girton College, Cambridge are pushing to be allowed to graduate. We’re introduced to the four students (Carolyn, Maeve, Tess, and Celia) who will show us the challenges they face, and the passion behind their efforts. The male students, although intrigued by the arrival of female students, are opposed to their being seen as equal students (which they most certainly aren’t), and they are even banned from lectures. Even amongst the women fighting for the right to education there are rifts – should they be supporting the suffragettes, or leave well alone to avoid controversy, and hopefully further their cause?

This is a magnificent play – humorous and moving. The male characters spouting absurd theories as to why women should not be educated, how their ‘wandering wombs’ cause hysteria, and their utter unsuitability for intellectual pursuits draws laughter from the audience, but with an awareness that it’s far from funny that this is what was thought to be truth a mere hundred years ago. The idea that women became outcasts for wanting an education is horrifying. They had to choose between love and education, and I’m so glad that there were women who had the passion and bravery to keep going (and men who were willing to make a stand and support them).

The acting was brilliant – the camaraderie and fun of the students, the passion of those fighting for women’s rights, the heartache and problems that continue to face students were all portrayed excellently. The script was well written with quips that had the whole audience laughing. This is an incredibly important story to tell, and Blue Stockings tells it in a moving, engaging fashion. A real gem of a play.

If you’ve seen the play and want to find out more, I urge you to read Jane Robinson’s book of the same name. I read it a few years ago and, although absolutely horrified by what the women had to go through to get an education, I was absolutely in awe of their determination, passion, and intelligence. I’m incredibly grateful for those who sacrificed so much for future generations to enjoy the right to an education. The book is easy to read and informative, but bound to stir up some strong emotions.

Posted by Ramblings of a nobody at 21:10 No comments: