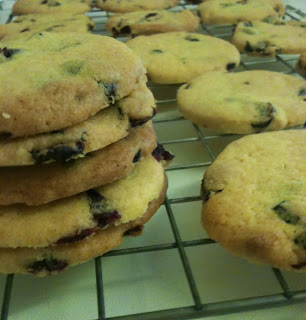 
Method:
Posted by Ramblings of a nobody at 22:07 No comments:

'The Secret History' by Donna Tartt 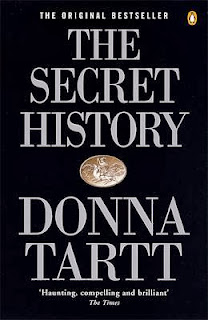 The Secret History  has a powerful opening - you know which character is going to die before you know anything about any of them, and you know the narrator was involved in the murder. This affects the way the reader sees the characters - throwing a sense of apprehension and anticipation over the rest of the action, and making you wonder what happened to the group of friends to make them kill one of their own.

Our narrator, Richard Papen, has just arrived at Hampden, a small college in Vermont, at the start of the novel. He soon joins the small and incredibly select set of Classics students. Already a sense of isolation begins to seep in - this small cluster of students are very much separate from the other students and teachers. They form something of a cult around their teacher, Julian Morrow, who they hold on a pedestal. This sense of isolation is increased greatly when Richard stays in Vermont over winter, almost killing himself with exposure to the cold. When everything starts to go wrong there is nobody to turn to, and yet it's not until quite late in the novel that he seems to realise quite how cut off from the rest of the college they are, and begins to question his somewhat rash decision to join the Classics class.

There's a real sense of innocence when he first joins Hampden - as you'd expect, he wants to be accepted by his fellow students. Many young readers will sympathise with his worries about friends moving away and getting married after college - acts he considers 'treacherous' (why can't life stay exactly as it is?). It is sad to see the innocence stripped away as he despairs later at the thought of being stuck with them forever, their terrible secret providing an everlasting bond.

I got slightly fed up half way through - their nonchalance at the first murder seemed unrealistic and made the characters feel one dimensional. None of them are particularly likeable, meaning their impending doom didn't come with much of an emotional punch. However, their gradual disintegration in the latter part of the novel is very well written, and you do feel sorry for Richard as he is drawn in to their dangerous game, and manipulated in to a precarious position.

Well written and intelligent, albeit perhaps a little unnecessarily long, this is certainly an impressive debut, but not, for me, life changing.
Posted by Ramblings of a nobody at 23:15 No comments:

In 1912 a glimmer in the ground was seen while work was being carried out in Cheapside, London. Further digging revealed a hoard of jewels that had been sitting, unclaimed, in the London soil for centuries. Thankfully, the workmen were honest and the hoard ended up in the care of the Museum of London.

This is the first time that the entire hoard has been on display since its discovery, and the level of security around the exhibition certainly emphasises just how important a collection it is. There are glittering jewels everywhere you look, and they are stunningly beautiful. The skill of the craftsmen who made the jewellery is apparent from the intricate work on show. It's not all Elizabethan and Jacobean treasures, some of the loot originated much further back in history.

The inclusion of examples of dress and portraiture are a wonderful way of gaining some understanding of how the jewels would have been worn. They look lovely glittering away in the cabinets, but it's great to have a bit of context. So eager to show off their wealth that often extra items would be tied to clothing - something I'd never noticed in portraits before.

An opportunity to see the entire hoard on display is not one to be missed (and if it's another hundred years before it goes on display again this is a once in a lifetime opportunity). The mystery remains as to whose hoard it is and why they never came back for it. In such a turbulent age there is no shortage of possibilities, and it's unlikely we'll ever know for sure.
Posted by Ramblings of a nobody at 17:43 No comments:

'Levels of Life' by Julian Barnes 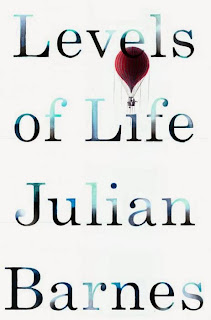 Ballooning, photography, love, and grief. Not an obvious combination of topics for a book. Split in to three sections, the first on ballooning and photography, the second a fiction about love, and the third about grief; it deals with big ideas and very real emotions.

I found the first section interesting, the second quite forgettable, and the third incredibly moving. The start of each section begins with an idea of putting two people/things together that haven't been put together before, and the consequences of this. This is pretty much the extent of the connectedness between each section, beyond a few mentions of characters throughout, and a couple of ideas that spring up in all of them.

The third, and longest, section focussing on life after the death of the author's wife is the most engaging and feels like the main purpose of the book. I almost decided against picking up this book because of some negative reviews saying Barnes comes across as bitter and self-centred, as though his pain is worse than that felt by others. I'm glad I ignored them and gave it a chance. It's a very honest portrayal of a deep grief, and one I think useful for those in a similar situation, or those wishing to understand what it's like to lose your partner. Although, as he says, grief is unique, and one grief can't explain another, there is a lot in here that will no doubt be familiar to others. One idea that I think will stick with me for a long while is that 'it hurts as much as it is worth'.

I'm not sure the book really works as a whole, but it is well written throughout and thought provoking. His portrayal of his grief over the death of his wife is honest and brave. Definitely one I'll come back to again and again.
Posted by Ramblings of a nobody at 20:48 No comments: