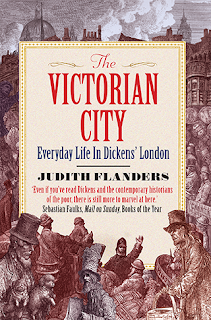 Dickens, the quintessential Victorian whose writings have shaped our views of Victorian London was, as Flanders points out early on, not just a Victorian. He was in his 30s by the time Victoria came to the throne, and died far before the end of her reign. This is therefore, a book not just about London during the reign of Victoria, but about the time Dickens lived and worked there, the title being something of a misnomer.

With an enthusiasm that shines out from every page, Flanders takes you on a journey through the streets of nineteenth century London, revealing a busy, enterprising age. She has obviously read widely and gives you the 'facts' from primary sources with a critical edge. Everything is covered from birth to death, and a whole lot of toil in between. This is an easy to read, informative book with an author who clearly has great enthusiasm for her subject. She picks out details from the minutiae of life that reveal a much more complex world than you get fed in many a period drama. I was struck by just how hard working the Victorians were - the modern world seems slovenly and lazy by comparison. This is a world so starkly different from out own, yet one in which much familiarity can be found.

Dickens is the starting point, and the heart of the book - references to his novels abound with explanations of how accurate his portrayals were (as well as pointing out when he may have exaggerated or transplanted events to an earlier date). I closed this book with a great respect for Dickens (and London's nineteenth century inhabitants as a whole), and a desire to read more of his work. Even if you are not particularly interested in the novelist there is still a lot to be gained in reading this.

Flanders' enthusiasm is infectious, and the London of the nineteenth century comes alive in her capable hands. You can happily read the book cover to cover but each chapters could be read independently and still be perfectly comprehensible. A great addition to any Dickens of Victorian enthusiast's bookshelf.
Posted by Ramblings of a nobody at 11:30 No comments: 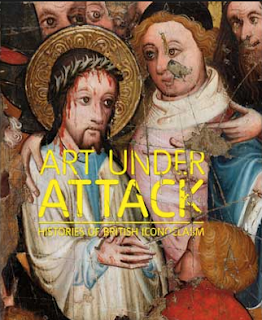 I went to this exhibition not really knowing what to expect. I don’t claim any great knowledge of British iconoclasm, and the only thing I’d heard about it was that the different sections were interesting, but quite disparate. I was intrigued by the subject matter, but did wonder how they would manage to cover such a broad period while keeping it fluid and relevant to the exhibition as a whole.

The first section was the one I was expecting to be most at home in – iconoclasm due to Henry VIII’s break with Rome, beautiful religious objects defaced, I knew where I stood with this. The lighting and layout created a serene feeling in these rooms, and it was a treat to see the objects up close and personal. It was interesting to see the different levels of destruction – some obviously felt far more passionately about it, others were merely following the law. Either way, it was sad to see so many items ruined. I liked the progression to art that was far less visual with the 16th and 17th century Protestants having a far less elaborate form of religious art.

The next section led to the politics aspect of the exhibition. There was no great time leap, and it all seemed very fitting. What better footing to lead in to it than Civil War destruction? I found this section probably the most thought provoking – the destruction of statues of high profile figures (something which is still common today), and probably my favourite objects – defaced coins. The suffragette attacks on art really got me thinking about if it’s ever OK to damage art. At least this was destruction with a cause rather than merely for the sake of repression. It also brought home the importance of art, that throughout history it’s been under attack precisely because it is so important (a fact that is actually very heartening, even if the destruction of it is deeply unsettling). I also feel it would be wrong to talk about this section without taking a moment to acknowledge the incredible conservation work done to some of the damaged portraits – you wouldn’t know they had been attacked to look at them!

The final section based around aesthetics was not one I was planning on spending that long in. I have nothing against modern art but I had thought I would be least interested in this section. I was wrong. The progression to iconoclasm as art was enthralling, and I became completely entranced by some of the pieces. I was particularly interested in the final portraits, a series entitled One Day You Will No Longer Be Loved by Jake and Dinos Chapman where they take historic portraits of unknown people and change them, showing decay. Although the archivist in my baulks at the idea of this, I really did like them a lot, and, if they hadn’t breathed new life in to them, chances are they would have remained forgotten.

Overall, this is a fantastic, thought provoking exhibition. It’s clearly been well thought out, and leads you through the history of British iconoclasm, showing the different forms it can take. I’d only ever thought of iconoclasm as destructive, but the exhibition made me see that iconoclasm can in itself create art. There’s some really great pieces on show, and with such a variety of subjects and mediums, there’s bound to be something that everybody will enjoy. It’s only on until 5th January, so if you haven’t been yet, you haven’t got long. Go, you won’t regret it.
Posted by Ramblings of a nobody at 22:56 No comments:

As Rambert Dance Company settles in to its new home on London’s Southbank it opened its doors to the public for a taste of what they do.

First up was a performance of The Rite of Spring by the students of the Rambert School of Ballet and Contemporary Dance. It’s incredible how some great choreography, well thought-out lighting, and talented dancers can completely entrance you. I thoroughly enjoyed his somewhat unsettling, ritualistic piece that showcased some dancers who will clearly be ones to watch in the coming years.

Next up was a panel discussion with Mark Baldwin (Rambert’s Artistic Director), Amanda Britton (Rambert School), Sara Matthews (Central School of Ballet), Mikaela Polley (Rambert), Janet Smith (Northern School of Contemporary Dance), and Jessica Ward (Elmhurst School) looking at preparing the next generation of dancers for the professional world of dance. Starting with a discussion of what companies and schools look for, and then on to the types of training the schools provide it’s clear that a lot is expected of the dancers, but that every member of the panel was genuinely passionate about helping talented dancers develop, and preparing them for careers to span beyond the short time they’ll be at their physical peak. What became apparent is that the dance world has changed, that it’s no longer a case of training, joining a company, and retraining at the end of that part of the dancer’s career for the next stage. The emphasis seems very much on exploring the dancers’ interests, developing relationships with choreographers, and understanding all the different roles that go in to producing dance shows. This enables them to create opportunities for themselves and develop their careers in a way that is right for them. There was also a discussion of what can be learned from the way sport psychology has been used to increase performance, and how dance psychology can be used to similar effect.

I was also lucky enough to sit in on a company class and rehearsal. Having only ever watched and taken part in classical ballet classes it was interesting to see something a bit different, and even in class the individual styles of the dancers were apparent. During the rehearsal it was interesting to see the dancers working together to try and get to grips with the timing of a piece. In every session I left with a real sense of how much they love what they do, and the importance of collaboration and teamwork.

The final event of the week was the highlight for me. Unpacking choreography with Mark Baldwin was a chance to see choreography in action, and what a privilege it was.  He spoke to the audience at the beginning and end about his choreographic techniques, where inspiration comes from, and the importance of collaboration. He had seven dancers with him who he got to choreograph short solos based on a snippet of music and movements that he demonstrated. The results were quite remarkable, and he showed how much difference positioning and tempo can make, as well as combining solos to make a group piece. It became clear what a delicate art choreography is, and how important it is to work with the dancers and musicians until you get something that feels right.
Posted by Ramblings of a nobody at 21:35 No comments: