I had a very enjoyable visit to Hampton Court Palace at the weekend, and thought I’d share some of the delights of one of my favourite historic sites with you. I didn’t take any photos at the weekend because I thought I had taken plenty the last time I’d visited. Turns out the photos I had taken previously were neither as numerous, nor as high in quality as I’d remembered, so I do apologise for that. 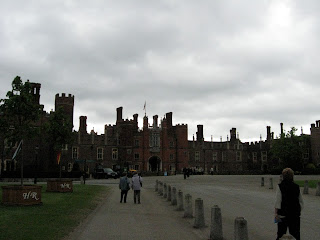 Hampton Court is one of those wonderful places where you are struck, not just by the majesty, and awe-inspiring size of the building, but also by how close to history you feel merely by being there. You can really imagine history happening there, and my goodness, did a lot of important history happen there. The palace is probably best known as a Tudor palace. I’ve always been under the impression that it was (well, the half of it that everyone thinks of as Tudor), and so I was most surprised to find that the initial archway, so emblematic of Hampton Court in all its Tudor glory is in fact a Victorian construction. Thanks to the wonderfully friendly and knowledgeable staff, I also discovered that Henry VIII’s palace would not exist at all had it not been for government turning down William III’s request for funds to finish his palace, a fact that physically makes me cringe at the thought of what would have been lost.
The whole visitor experience is fantastic, they have events every day to engage visitors of all ages with the history of the place, but there’s plenty of wandering to be done around Tudor kitchens, the private apartments of later kings and queens, and the stunning gardens. Whilst travelling through the Great Hall, admiring the impressive tapestries covering the walls that are currently having conservation work done on them, I found myself in the middle of a tour group. I’m not always the biggest fan of organised tours, but this particular tour guide had many an interesting tale to tell, including the sorry tale of the painted Tudor ceiling, the paint having been removed in the 1950s (I think) as they thought it was a Victorian addition. They realised half way through their mistake, but completed the job nonetheless, devastating! It makes me appreciate groups like Historic Royal Palaces, English Heritage, and the National Trust who take care of our heritage, and hopefully wouldn’t let such vandalism occur today. 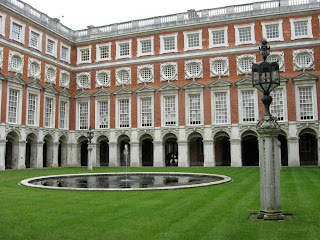 Travelling through the Tudor courtyards to William and Mary’s section of the palace, it’s like travelling through time, such a stark contrast, both equally beautiful and fascinating in their own way (although the Tudor section is supposedly more haunted, seems we have Henry VIII to thank for that!). I was lucky enough to be there when there weren’t too many other visitors, and entering the Georgian apartments felt like stepping back in time. Through closed doors (which I was allowed to enter, honest), it felt like I was merely exploring my own personal palace. They have managed that difficult balance between giving enough information and not spoiling the atmosphere of history by putting up too many signs, etc. The audio guide was hugely informative, and there were plenty of members of staff to hand for any further questions. 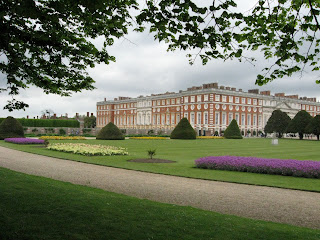 The gardens of Hampton Court really are stunning, and you catch glimpses of them through windows as you walk around the palace. It would be easy to spend many hours soaking in the wonderful surroundings (and getting lost in the maze…). I also discovered that there is an exhibition about the garden there that I had not come across before.
An utterly marvellous palace, with such a fascinating history. I bought the guide book, and was interested to find that although it hasn’t been a royal residence for many years, and was opened to the public by Queen Victoria, there were still residents there, known as grace-and-favour residents. Imagine living in such spectacular surroundings…
Posted by Ramblings of a nobody at 18:21 No comments: 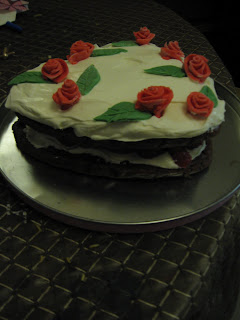 As you may be able to guess from its appearance, I made this cake for Valentine's day, but I see no reason why red velvet cake can't be eaten on any given day of the year. Having never made red velvet before I just followed a recipe from a book, and, although the overall taste was nice, I wasn't blown away by the cake. There are plenty of recipes online though which you may wish to try out, I found one on the BBC Food website, and I used the recipe for icing from this site:
http://www.joyofbaking.com/RedVelvetCake.html
The only addition I made was to add a layer of sliced strawberries and raspberries in the middle, which I think worked quite nicely with the recipe I used, but then I don't know how red velvet usually tastes...
Rather than plagiarise someone else's recipe, I thought this post could be more about the decoration than the recipe itself. I'd never made roses from icing before, so I don't claim to be an expert, but I was pretty pleased with how they turned out. First I rolled out a reasonably small slab of red icing, and using a knife, cut a thin strip. I then rolled this into a loose coil, working downward, creating a more prominent middle. I then cut patches of icing, and using a nifty tool I picked up in Hobbycraft 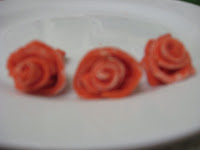 (essentially a stick with a small ball on the end), attempted to make it look more petal-like (basically rolling the ball around on the icing to make it curl up somewhat). I then wrapped a few of these around my initial coil of icing (the additional layers were not wide enough to encircle the entire coil, try and not make them more than about half the width). It took a while to make enough, there were lots of rejected scraps, but if you keep at it you should get a fair few made with relative ease (and if not maybe just have a centre-piece with however many went successfully). I found I ended up with quite a long 'stem' of red icing which can easily be snipped off.
To complete the cake I thought a few leaves would be a nice addition. Simply done; roll out some green icing (a bit thicker than the red icing, as it doesn't need quite so much shaping), cut out roughly leaf shaped sections with a knife, and using a slightly thicker knife, or a pointy tool that you might get in a set for cake decorators, mark a central partition, and scrape in vein lines, to the edge of the leaf, which should make a nice, slightly jagged edge.  Arrange in a pretty fashion, and you have an attractive cake to give to a loved one.
Posted by Ramblings of a nobody at 21:13 No comments: 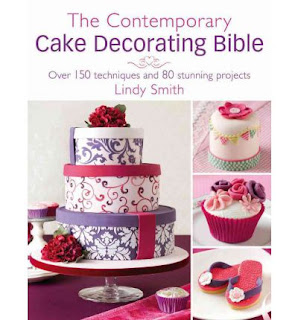 For Christmas, happily, I received rather a few books. This little treasure found its way under my tree, and truly is one of the best cake decorating books I have come across for a while. Some of the techniques seem way too complicated for me, or rather require more skill than I possess, but whether or not you feel up to the more complicated techniques this book provides some great inspiration, and certainly opened my eyes to some new techniques that didn't sound too difficult. The first that I tried out was using cake stencils, and I have to say I was pretty pleased with the result.
Having perused the internet for some pretty stencils I found that they are actually quite pricey (some of them were about £24 for just one stencil), and what I really wanted was for something a bit cheaper to get me started. Luckily, in my local bookshop I came across a set that had eight stencils in and only cost £13! One of the stencils shown on the front seemed like a good choice for the cake I had in mind, and so I bought them, studied my cake decorating book some more to make sure I did it right, and gave it a go. I admit I was initially somewhat put off by the
images on the front, which look to me a little 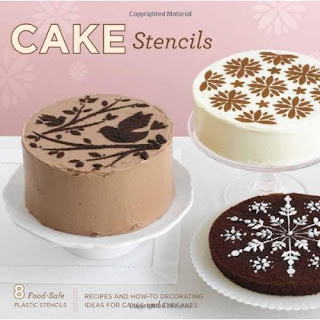 dated, but once I'd opened it up and seen the stencils themselves I could not have been more happy, and with my trusty cake decorating book to hand I was confident I could make a lovely looking cake.

I set to work baking my cake. I'm sure most cakes would be fine to use (any that are tasty with icing anyway), but I just made a basic sponge as it was for a birthday cake.

To save you trawling through old posts, here's my recipe:
To decorate, cut the cake in half (once cooled), cover one half with buttercream icing (keeping some to spread on the outside of the cake to make the roll out icing stick), and the other half with raspberry jam, and sandwich together. 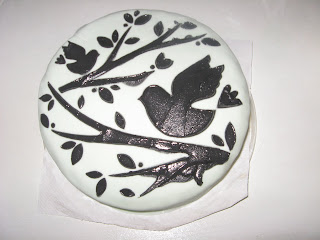 I then kneaded my roll out icing on a lightly dusted surface (with icing sugar), and added some green food colouring, kneading until a light green, even colour was created.

I spread the remainder of the buttercream on the outside of the cake, and placed the icing on top, smoothing the edges, and cutting to size.

Finally, onto the new and exciting part. First, I made up some black royal icing (either mix an egg white with icing sugar, or buy royal icing sugar and follow the instructions on the packet). It needs to be really quite thick, so it doesn't run. This next bit was one of the more nerve-wracking moments in baking, placing the cake stencil on the top of the cake, and using a knife spreading the black icing all over the top (holding the stencil in place as much as possible). You can imagine my delight when pulling back the stencil to reveal this lovely picture (and no, it didn't come out absolutely perfectly, but I was more than happy with it, and relieved that there wasn't a massive blob of black icing on the top of my lovingly baked and iced cake).

Everybody seemed very impressed with the cake, and I admit I felt a bit of a fraud as it was much simpler than people seemed to think. It's a great technique, especially if you are short on time, and very effective. To get a bit more complicated/creative you could try adding different colours to the stencil, or even trying to make your own (I think my cutting is a bit too clumsy for this, but hopefully one day).
Posted by Ramblings of a nobody at 16:22 No comments: