We’re now two months into lockdown, the supermarket shelves are generally full once more, and we’ve all been doing a lot of home cooking. I thought this would be a good time to share some of my favourite cookbooks. 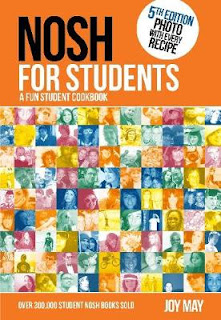 Nosh For Students by Joy May
I picked up this book over a decade ago before heading off to University and fending for myself for the first time. It’s a great book designed for cooks with limited equipment and money in mind. The spicy risotto and chocolate pudding were firm favourites but there’s so much more on offer. All recipes are rated on difficulty so you can choose your food according to how ambitious you’re feeling.

River Cottage Veg Everyday by Hugh Fearnley-Whittingstall
I feel like almost everyone I know has a copy of this book on their shelves, and it’s a good’un. Full of great ideas for getting more veg into your diet. Personal favourites are the beetroot hummus and a newly discovered peanut noodle salad (even after years of use it’s got some great treasures to discover). 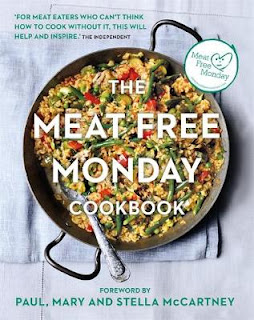 A great book for anyone wanting to take a tentative step into the world of vegetarianism (or those already firmly committed). It offers suggestions for every meal of the day, seasonal ingredients, and even some yummy desserts to round off the day. My most made recipes are the giant wholeweat cousous and sweet potato, and the porcini risotto. The blueberry pancakes are also great as a treat to start the day.

The Vegetarian Athlete’s Cookbook by Anita Bean
A brilliant book for any health conscious cook, this book is packed full of healthy meal ideas (and healthier desserts), with details about what nutrients each recipe supplies and more general advice about making sure you get enough of what you need. The walnut burgers are great, as are many of the salads and the smoothies. This is probably the book I’ve made the most variety of recipes from, they generally don’t take more than about half an hour to make so it’s perfect for mid-week meals. 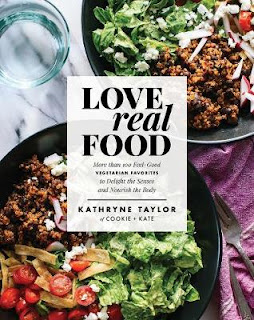 Love Real Food by Kathryne Taylor
A wonderful book full of wholesome, nutritious meal ideas. There’s rarely a week that passes where I don’t make one of her recipes. She has a great website so you can try out some of her recipes before buying the book. They’re often fairly lengthy recipes so make great weekend meals, and the leftovers are perfect for packed lunches during the week.

A Passion for Baking by Jo Wheatley
I’ve had this book on my shelves since it first came out and it’s probably my most used baking book. Lots of tasty, homely recipes, both savoury and sweet, it will inspire you to bake more often. A few of my favourites are the custard creams, chocolate chip cookies, and the blueberry muffin loaf. 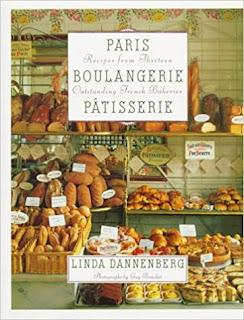 The first time I went to Paris I fell completely in love with the delicious treats on offer in its boulangeries. It completely ruined the British equivalents for me and I came back determined to learn how to make them myself. This book is a wonderful way to do so. It gives details about some of the author’s most loved Paris boulangeries and offers some recipes from each. The recipes are generally very labour intensive but absolutely worth the effort.


This is a fairly new addition to my baking bookshelf but every recipe looks delicious. There’s a great range of bakes and so far they’ve turned out just as tasty as they promised. Currently munching my way through the white chocolate and coconut semifreddo.
Posted by Ramblings of a nobody at 12:00 No comments:

The Bookshops of Hay-on-Wye


It’s that time of year again, when book lovers would usually be descending on the small town of Hay-on-Wye for its famous literary festival. Unfortunately, the physical festival has had to be cancelled this year, but they’re still offering an impressive array of virtual events for us all to enjoy. The local bookshops will be suffering the financial hit of losing out on their biggest period of sales for the year and so I thought I’d do a run-down of some of my favourite bookshops there and how to support them during this time. I’d also highly recommend visiting when things are open again as it’s a wonderful place to visit at any time of year. The surrounding areas are stunning and Shepherds Ice Cream parlour is the perfect place to refuel in between all that book shopping.

Addyman Books own three bookish spots across the town – Murder and Mayhem, devoted to detective fiction, Addyman Books, and the Addyman Annexe. Their shops are full of quirky nooks and a great selection of books. You can support them online here.

The Hay Cinema Bookshop is a large converted cinema which is now filled with seemingly endless rows of books. They keep some of their stock outside so you can browse in the sunshine before heading in to lose a few hours browsing. They can be found online here.

Pemberton’s Bookshop is a great spot for those who prefer their books brand new. They offer a great range at good prices and also stock a range of greetings cards and similar. Find them online here.

Richard Booth’s bookshop carries the name of the man who was instrumental in giving Hay its book town status. It’s a wonderful, spacious spot that offers a huge range of both new and second hand books, and there’s even a nice café and cinema. Check them out here.

This is just a small taste of the bookshops in this wonderful little town. Many of the shops specialize in particular subjects whether it be children’s books, music, poetry, or natural history, there’s bound to be something for every reader. Check out the full list.
Posted by Ramblings of a nobody at 12:00 2 comments: 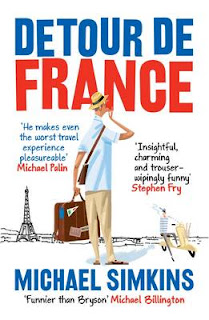 Simkins takes himself on a three month jaunt around France to broaden his horizons and learn more about the reality of French life. What ensues is a series of amusing encounters that don’t always go to plan but demonstrate his commitment to trying new things and breaking old habits. This can be as simple as taking a dip in the sea, playing a game of petanque, or letting go of his inhibitions and spending a day in a naturist resort. He visits a few popular tourist sprts such as Arles but rarely for the reasons many visit, always searching for a taste of the real France. Despite his hesitation on embracing some of the experiences, he comes to appreciate the time taken over a good meal, the climate, and the importance of doing things properly.

At one point he plays cricket with a group of British immigrants, who despite their moaning about both their home country and their new, all admit to being pleased with their choice despite the sacrifices involved. By the end he is himself quite enamoured by the country but can see its flaws, especially in its infamous bureaucracy and ardent nationalism.

This is an easy to read account of a sometimes ill-fated exploration of a great country with its mystifying rituals and effortless chic. He is able to laugh at both himself and the situations he finds himself in. The humour is occasionally cringey but often genuine and self-deprecating, and you get an insight into what France has to offer the curious tourist determined to step outside his comfort zone.

Pick up a copy:
Foyles
Waterstones
Posted by Ramblings of a nobody at 14:37 No comments: 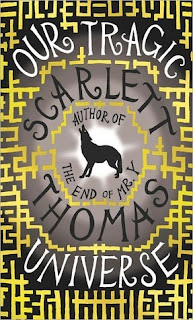 The novel gets off to a dramatic start with a car being pushed into a river in an attempt to avoid being caught in infidelity. This first section presents us with an array of unhappy relationships that will develop throughout. Meg, our protagonist, is a ghostwriter for popular genre fiction and aspiring literary author. She is stuck in a damp cottage with a partner she no longer loves, who contributes nothing financially, and causes her a lot of anxiety with his temperamental ways. She reviews books for a local paper and when an unusual non-fiction with strange ideas about the universe and the afterlife lands on her desk she finds her world beginning to shift. What follows is a gently paced tale of very ordinary lives interspersed with musings on the construction of stories, sock knitting, and the role of New Age theories.

These side topics can be frustrating or interesting depending on your taste. The gently littered references to various hobbies can feel natural whereas the longer segues in to conversations about high level theories often feel unnecessarily lengthy and halt the narrative. Thomas makes it clear how these thoughts fit into the overarching purpose of the novel but they can still present a block to enjoyment.

Meg's character is contradictory, but often in ways that tickle the reader. She has very clear ideas about what a genre novel should be and how none of the components can fit into her ‘real’ novel, revealing the pointlessness of snobbery about books. She deletes more words than she replaces and yet believes it is a lack of time that prevents her writing, finding lots of little obstacles, yet she makes use of every spare second when writing her genre fiction, admitting to writing on her phone in supermarket queues. It seems clear that she is setting herself so may tight restrictions to achieve her ‘real’ novel and therefore stunts her imagination, enjoyment of the writing, and therefore probably also that of the reader, should she ever finish it.

Her constant excuses and imagined barriers are also reflected in the inability to escape unhappy relationships in both herself and her friends. She does eventually realise that there’ll always be reasons why now is not a good time but that they’re not worth wasting your life for. This revelation is a relief to readers as the picture built up of her relationship is so claustrophobic and unhealthy that you’re desperate for her to escape.

This is a gentle read with believable characters living very ordinary lives and for the inquisitive mind there’s much beyond the narrative to get stuck in to. The relationships depicted feel real and Thomas doesn’t present us with all the answers for a happily ever after.

Pick up a copy:
Foyles
Waterstones
Posted by Ramblings of a nobody at 18:39 2 comments: