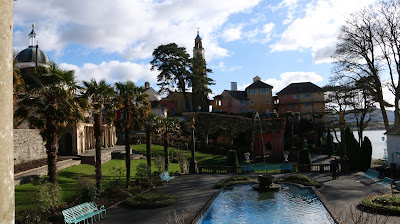 Portmeirion , a small coastal village in North Wales, is the brain child of architect Sir Clough Williams-Ellis. His desire was to create a village where the architecture and landscape were at one with each other, and he spent fifty years in the mid-twentieth century carefully crafting just such a place. On arrival it feels a little like you are in a life-sized model village, a somewhat surreal experience,  but I defy anyone not to be won over by the unique charm of it.  The Italianate stylings of the buildings and the bright colours are a contrast to what you might expect to find in Wales, and if you are lucky enough to visit on a sunny day it is not hard to imagine yourself transported to the Italian Riviera. The buildings were constructed at different times, and indeed some were merely transported from other towns, but Williams-Ellis ensured that the unity of the village was upheld. Wandering around Portmeirion you can see its designer all around you and feel a sense of contentment at the realization of his dream. 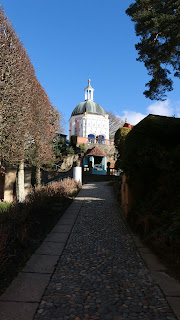 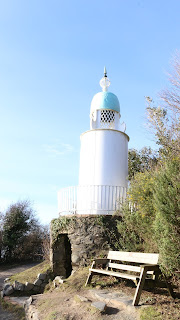 It is a tourist village with many taking advantage of the opportunity to stay in this tranquil haven, but day visitors are made welcome. Beyond the village centre there are beautiful coastal and woodland walks to enjoy. Visiting at the end of winter meant flowers were beginning to bud, creating a delightful contrast to the sparseness of many of the trees still bare from the winter.


Portmeirion is one of the most calming, peaceful places I’ve visited and I would quite happily have stayed much longer. Whether it would have been quite so pleasing on a darker day I do not know, but if you’re lucky with the weather this seems to me the perfect relaxation location. 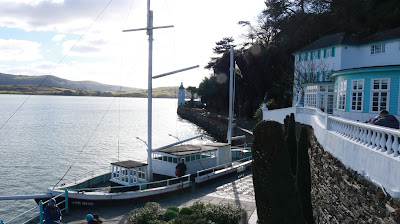 Posted by Ramblings of a nobody at 23:00 No comments: 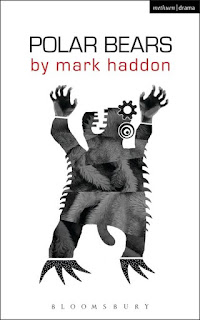 Polar Bears by Mark Haddon premiered at the Donmar Warehouse, London on 1st April 2010 to underwhelming reviews. Sadly, it completely passed me by at the time but at least there is the option of reading the script, and what a read it is. The play starts with a confession of manslaughter and the narrative continues out of chronology to delve deeper into the psychologies of the characters.

The story centres around Kay, a sufferer of bi-polar disorder, and her sedate, some may say boring, philosopher partner John. She is not, however, the only character struggling. Her father committed suicide and neither her mother nor her brother Sandy, who discovered the body, have fully recovered from the trauma. There is a particularly disturbing scene in which Sandy and Kay are younger, with him forcing her to recite the suicide note with a noose around her neck. Their mother seems unable to move forward with her life and warns prospective partners off Kay, potentially a defensive strategy to protect against loneliness and maintain control of her offspring.

We see the pressures Kay has had to contend with that would have shaped her personality as well as getting a glimpse of the confusion and fear that her illness causes. The focus on the resultant relationships with those closest to her is interesting and complex. Her brother Sandy is unsympathetic to her suffering, seeing the illness as an excuse, a way of blaming others for her failings. John tries his best to understand and be patient, attempting to gain a clearer sense of what Kay is going through by talking with her incredibly unhelpful family who remain closed. His struggles with this continue throughout.

Many reviewers of the play have bemoaned the lack of relief from the dark, that the story is just too confronting. Personally, I devoured it with great eagerness - there are moments of humour within the intensity of the bulk of the play. The characters are well drawn and their development is cleverly constructed. It would be interesting to see the piece performed but for now reading more than suffices. I don’t usually read plays but was very glad I made the exception for this insightful work.
Posted by Ramblings of a nobody at 23:04 No comments: 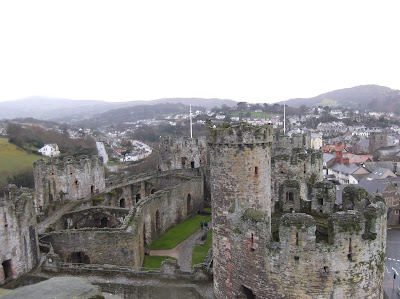 The formidable Conwy castle dominates the skyline of this small Welsh town, the medieval walls, still largely intact, snaking around its border. The castle and walls were built in the same major feat of construction by Edward I during his conquest of Wales in the late thirteenth century. 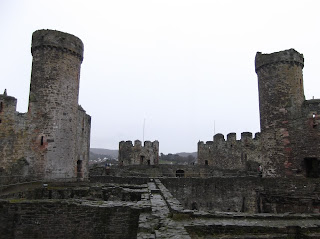 There’s a remarkable amount of castle left considering the wars it has witnessed, being the site of several revolts between the thirteenth and fifteenth century, and continuing to be a stronghold in many conflicts beyond. It was damaged by the Parliamentarians after they took control in 1646 in the hopes that it would prevent use during future wars. Further damage was inflicted in 1665 when it was stripped for its valuable materials. With its eight towers and heavy defences it is clear the structure would have been an intimidating prospect for invaders. Most terrifying of all, for me at least, is the twelve-foot deep prison – a dungeon with no way out and no easy way down. Staring down into its dank darkness conjures images of the unfortunates who fell out of favour, flung down remorselessly to rot with the remains of previous inmates, a harrowing thought. 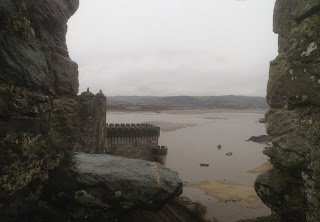 Thankfully, even disobedient modern visitors do not face such a fate, and can enjoy the atmosphere of this impressive piece of history. The views from the towers are worth the climb, although you may feel a little queasy if you’re not a fan of heights. The history of Conwy castle is palpable as you explore the ruins of this great fortress and is bound to ignite interest. Well worth a visit.
Posted by Ramblings of a nobody at 22:47 No comments: