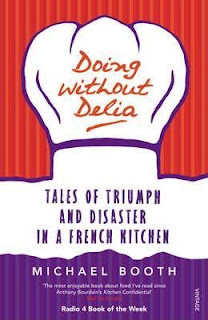 When Michael Booth decides it’s time he learns to cook without the guidance of his favourite celebrity chefs he doesn’t take the decision lightly. Starting with a bonfire of the cookbooks he has accumulated over the years he moves his family to Paris and enrolls in Le Cordon Bleu in what he describes as ‘as noble a way of jeopardizing the security and well-being of my family as I could think of.’ Despite commenting on how not child-friendly Paris is the family seem to settle in and other than piling on a few pounds from all the rich food he brings home they don’t seem to suffer too much for the upheaval.

Despite the prestige and eye-wateringly expensive tuition fees Le Cordon Bleu is somewhat run down and offers fairly rudimentary equipment. Their tutors however, eccentric as they are, have such depth of knowledge that the experience proves to be absolutely worth it. Despite a disastrous first practical in which he slices his hand open, Booth flourishes. He doesn’t agree with all that is taught – the use of pre-grated cheese constantly niggles at him and turning vegetables never seems necessary. However, he does learn to cook without the need for recipes and in reading this book you’ll pick up tricks and tips that you likely didn’t know before.

There are recipes littered throughout, none of which I have yet tried – French cooking is not known for being vegetarian friendly, but I am intrigued by the idea of a chocolate risotto. There are some gruesome descriptions of having to decapitate live crabs and lobsters, for which he feels bad, but the taste of the final dish seems to negate any guilt he may have felt.

This is a humorous account of the author’s journey through French cooking, the camaraderie and competition with his fellow students, and at its heart a love of good food. A treat of a read for foodies and Francophiles alike.
Posted by Ramblings of a nobody at 12:00 No comments: 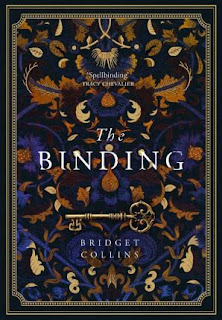 This post contains affiliate links. If you click through and buy I will receive a percentage commission at no extra cost to you.
The Binding is set in a world where reading books is a much more complex, dangerous activity than it is for us. Books do not contain mere stories, but memories that have been removed and bound – think Eternal Sunshine of the Spotless Mind with books. Emmett Farmer is sent to be a binder’s apprentice after recovering from an illness that seems to have driven a wedge between him and his family. He goes innocently, not understanding the nature of books, but with a change of employer he soon comes to learn of the dark side of the profession.

The moment when it is revealed that powerful men are using bindings to get away with sustained abuse we realise just how sinister the concept can become. Corruption and greed of some binders facilitate this, whereas the more noble adhere to a stricter moral code, only permitting a binding once per person. The novel may have the air of the Victorian period but this abuse of power and the complicity of those willing to look the other way is an issue that feels very relevant to the world we’re living in now.

The blurb and press around it doesn’t give much away of the crux of the tale. Split into three parts, after the first it becomes apparent that at its heart is a love story, one of learning to accept yourself despite rampant prejudice and discrimination. The way in which the story is told is interesting – the narrative point of view shifts between the two lovers, leaving the reader to be led by the character whose memory has been wiped. By the time you reach part three you know the full story but your narrator doesn’t and it is hard to watch the fallout. We come to understand the emotional devastation that can be wrought from a binding and how damaging it can be when you discover you’ve been bound with no way of finding out why. The mind naturally jumps to the worst case scenario and we watch as they struggle with intense guilt, doubting their morality with the help of those who genuinely behave atrociously.

An intriguing novel cleverly constructed to keep the reader hooked. There is much left unanswered and the side characters have such promise that is often left untapped, leaving you wanting to know more, to see how their story ends. A fantastical setting for a very human story.
Pick up a copy:
Foyles
Waterstones
Posted by Ramblings of a nobody at 12:00 8 comments: 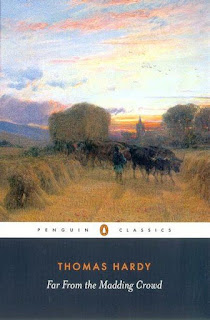 Published in 1874, Far From the Madding Crowd is Hardy’s fourth published novel and underwent many edits and revisions throughout his lifetime. This Penguin edition revives his original manuscript with notes explaining excisions in the serialised version. The book revolves around Bathsheba Everdene and the three men vying for her heart. Patient, loyal Gabriel Oak who brings to mind Diggory Venn in The Return of the Native, Boldwood, swayed into affection by a foolish valentine but then doggedly determined in his attempts to secure her hand in marriage, and Sergeant Troy who is introduced as disingenuous and impulsive. I’ll leave it to you to surmise who she chooses.

Occasionally naïve in her behaviour, Bathsheba is nonetheless headstrong and ambitious – she refuses to marry one she does not love, but further, she is reluctant to give up her position as head of house and farm as she would be obliged to should she marry. Keenly aware of the societal expectations of women, she pushes against convention and is disappointed when she believes herself to be acting in the weakness of her sex. Her blunt honesty, beliefs about marriage, and confidence in a world designed for men makes her feel quite modern despite circumstances forcing her into more traditional roles.

Hardy’s characteristic affinity for using chance as a narrative device to progress the plot is present at a number of crucial moments as is his favoured fatalistic character arcs. The characters that make up the local community seem inconsequential but succeed in adding context to events. Hardy’s verbose descriptions will frustrate or delight depending on preference, but the climax is sure to grip all who reach it.

Pick up a copy:
Bookshop
Foyles
Waterstones
Posted by Ramblings of a nobody at 12:00 No comments: