Twenty-two years ago Northern Lights, the first book in Pullman’s His Dark Materials trilogy, was published. Yesterday, the first book in a new trilogy, The Book of Dust: La Belle Sauvage was published, transporting readers back to the world of Lyra Belacqua, to the great joy of his many fans. When asked how this new series fits into the world of Lyra he claims it could be thought of as a prequel, but he is more inclined to think of it as an equal. After the publication of the final book in His Dark Materials Pullman publicly said the story had ended there and there would be no more. The conversation started with this tonight, asking what changed his mind. He answered that the seed was lodged in his mind with the publication of Lyra’s Oxford in 2003. He knew the story would involve Lyra, but not how. It stayed with him, and finally the world is ready to embrace her return.

Speaking about his writing practice, he told of the importance of poetry, that this was how he first came to writing, in writing bad imitations of Dylan Thomas and Bob Dylan in his youth. He may now have turned his attention to prose but the rhythm of it remains central. He claims to sometimes know the rhythm of the next sentence before he knows what it’s going to say. This is why he cannot write with music on as it disturbs the rhythm of the writing. He spoke also of the many voices that go into making a novel. The voice of the narrator is not that of the author, and the book also has an expected reader, which often of course turns out not to be the actual reader. Pullman describes writing as being a dictator, in control of the characters’ fates, but once it’s out in the world you no longer have control. You don’t know who will read it or how they will respond, and that there is no right or wrong way to read a text. He was adamant that children should be introduced to the magic of reading and not forced to share their responses as is so often the case in primary schools, but to let it stay with them.

Inevitably the conversation turned to religion. His Dark Materials has caused outrage among some religious groups who believe it is about killing God. Pullman is very open about his beliefs, and thinks that ‘the original sin’ is really painting curiosity as a sin. That the Fall happens in everybody’s life during adolescence, this knowledge of good and evil, and it’s important and should be encouraged. He was also asked about his opinions on some of the most well known Christian novelists – C. S. Lewis and J. R. R. Tolkein. He has said before that he doesn’t agree with how Lewis concludes the Narnia series, however, today he cited the idea that his books seem more genuine than Tolkein’s in that they have the struggle of faith in them, and that in Tolkein’s there’s never any wavering of intent. This he believes is because Tolkein was a Catholic whereby he had everything theologically sorted, whereas Lewis, as an Irish Protestant, had experience all the associated tumult. He ends with the thought that Tolkein’s works therefore end up feeling somewhat trivial, an unpopular opinion with the audience.

Finally, during the Q&A session there were lots of questions coming in from Twitter regarding the films that never quite made it to the end. Pullman’s explanation for this was that books don’t translate well into films, that if you go to see a film of a book you enjoyed you almost expect to be disappointed. Inevitably huge amounts of detail from the books will be cut to fit into 120 minutes or so, and this is why he believes that long running TV serials such Game of Thrones are a much better way of translating books to screen. To the great delight of the audience he revealed that this kind of project is currently in progress for His Dark Materials.
Posted by Ramblings of a nobody at 02:22 No comments: 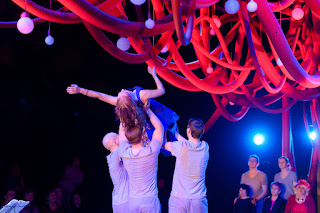 In Touch is a co-production of An Inclusion Theatre Company and Theatre of Nations in association with Graeae Theatre Company, National Theatre, the British Council, and Sense. The cast is made up of deafblind, blind, visually impaired, D/deaf, hard-of-hearing, sighted and hearing people sharing their stories. They are accompanied by Jenny Agutter and Yevgeny Mironov telling of the lives of Olga Skorokhodova and Professor Suvorov, pioneering deafblind academics.

We are told about the actors’ lives, experiences of blindness and deafness, and their hopes and dreams. The most heart-wrenching part for me was hearing what the last thing they remember seeing was. The show is not designed to induce pity, quite the opposite, it challenges any misconceptions that deafblind people are different, showing that they have the same hobbies, hopes and dreams as anyone else. It is saddening to realise just how hard it is for them to engage with the rest of the world with such a pitiful lack of inclusive opportunities.

The mix of spoken, signed, and physical theatre made for an eclectic, engaging show. Parts were in Russian, leaving me reliant on the surtitles. This, and the way the focus jumped around from actor to actor, from one theme and style of performance to another, gave a sense of disorientation, which I assume was intentional. This was probably the most inclusive event I’ve ever been to – there was audio description, surtitles, and live BSL interpretation. May this be an example of what can be achieved and its lead followed by other theatres.

Posted by Ramblings of a nobody at 19:12 No comments: