We Have Always Lived in the Castle, Shirley Jackson 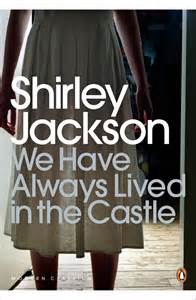 The opening of We Have Always Lived in the Castle is an exquisite piece of writing. It starts simply enough – we are introduced to the protagonist, Mary Katherine Blackwood, ‘Merricat’, and she is doing nothing more complex than going to the local shop. In her introduction however, she breezily passes on snippets of concerning information – her obsession with magic and knowledge of poisonous plants, and the fact that the majority of her family are dead. Although we have just been told she is eighteen, the games she plays in her head make her seem far more child-like, an unsettling juxtaposition with her more violent imaginings.

The trip to town is claustrophobic, her tension and discomfort palpable. It is so masterfully constructed that months later my stomach still knots with unease at the thought of it. Even at this early stage there are hints that although her family may not be popular, her anxiety may be a result of paranoid constructions of her mind rather than genuine ostracisation by neighbours. Certainly as the novel progresses we see how desperately she does not want others entering their home, upsetting the balance.

Home life for Merricat is certainly an unhealthy mix of anxiety and forced normality. Living with her sister Constance, accused and acquitted of the murder of the rest of their family, and their Uncle Julian, wheelchair bound as a result of the events that ended the lives of the others, they rarely leave the house and are almost entirely isolated from interaction with outsiders. The relationships are strange – Merricat’s desire to protect Constance from judgment is laced with a sense of wanting to control her, of not letting anyone separate them. Julian is obsessed with remembering what happened the night of the murders but talks about it almost in jest. He believes, however, that Merricat is dead and she is not allowed in his room, or to do many tasks around the house.

This seething bed of distrust and claustrophobia chips away at their mental states despite obvious attempts to continue as if all is well. When their cousin Charles arrives and becomes closer to Constance we see Merricat flailing in desperation as she tries to protect her family and the strange cocoon in which they live. Events culminate in a dramatic night and as the dust settles a distorted ‘happy ending’ is reached.


The novel is dark and mysterious, creating an atmosphere that is deeply unsettling. There is an element of magic with Merricat’s attempts to ward off evil and her interactions with her cat Jonas, who is reminiscent of a witch’s familiar. After such an intense, psychologically interesting read I found the final section somewhat lacking. Nonetheless, this is definitely one to read for fans of the Gothic, psychology, mystery, horror, indeed, anyone who enjoys good quality reading.
Pick up a copy:
Bookshop
Foyles
Waterstones
Posted by Ramblings of a nobody at 00:15 No comments: