The Private Memoirs and Confessions of a Justified Sinner, James Hogg 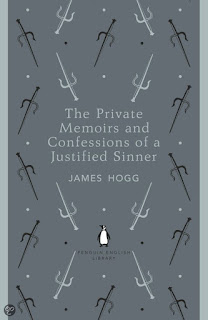 Hogg’s oft-neglected novel was first published in 1824 and quickly faded into obscurity, where it remained until the second half of the twentieth century. Justified Sinner details the life of Robert, likely an illegitimate child, rejected by his mother’s husband and raised by Reverend Wringham, a radical autonomian Calvinist. He is indoctrinated with the belief that he will attain heaven regardless of his earthly actions, and sets out on a bloody life, destroying those he considers unholy. He is egged on by a mysterious doppelgänger who goes by the name of Gil-Martin and whose influence eventually becomes too much to bear.

We are presented with two unreliable narratives – that of the editor who provides details he would not possibly know without being omnipresent, and Robert’s own confession, which paints his story in a rather more sympathetic light. He shows himself to feel regret at others taking the blame for his wrongdoing and his initial reluctance to commit murder. He is also accused of crimes he has no recollection of – whether this is a symptom of his fractured mind or simply Gil-Martin acting in his place is never clarified, allowing the reader to draw their own conclusions. Despite his failings, it is difficult not to pity Robert as his world becomes increasingly claustrophobic, Gil-Martin an unwelcome presence in his life.

Often cited as laying the foundations for popular tales such as The Strange Case of Dr. Jekyll and Mr. Hyde, this is both an interesting dissection of one man’s psychology, and a satire of Calvinism and the effects of extremist beliefs. The confused state of Robert’s mind is reflected in the structure of the storytelling, making it a challenging read. What initially feels almost a comedy quickly turns much darker, and the refusal to give a solid answer to the many questions raised ensures continued intrigue. This feels like the kind of book that would benefit from a second reading, allowing time for the ideas to settle and develop.
Pick up a copy:
Foyles
Waterstones
Posted by Ramblings of a nobody at 23:36 No comments: 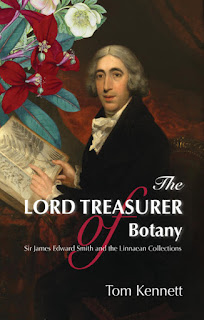 The Lord Treasurer of Botany is the first full-length biography of Sir James Edward Smith, something of an unsung hero in the world of botany. Born the son of a Norwich textile merchant he was on the path to becoming a physician when he made the fortuitous acquisition of the collection of Carl Linnaeus, an influential eighteenth century botanist, physician, and zoologist. For appearances’ sake he continued with his studies but botany had won his heart and he had every intention of making it his life’s work. He founded the Linnaean Society in 1788, an institution still in existence today, and one that was central to scientific study in the nineteenth century.

Smith was often unwell and had a weak constitution but could be intrepid and determined when the need arose. He did not suffer fools lightly and had a number of very public disagreements with other prominent figures. His defining legacy is described as his binomial system and standardization of terminology, which proved to be a great contribution to botanical study. He published a number of works, most notably his mammoth set of volumes, English Botany, produced over a twenty-year period with James Sowerby. Smith’s concise descriptions paired with Sowerby’s hand-coloured plates opened the subject to a broader audience than previously.

This biography reveals not just the scientific contributions made by Smith but also the colourful life he led. He lived during such pivotal moments in history as the French Revolution, and this wider historical context is woven neatly through the narrative. The book is firmly rooted in documentary evidence, despite the lamentable fact that his wife Pleasance destroyed most of his personal correspondence after his death. Overcoming this loss, Kennett succeeds in illuminating the character of this determined, influential figure.
Posted by Ramblings of a nobody at 22:29 No comments:

Don’t Point That Thing At Me, Kyril Bonfiglioli 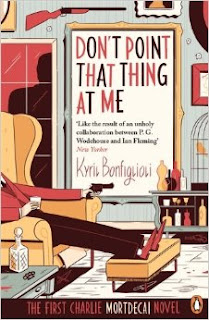 Don’t Point That Thing At Me is an irreverent romp through the seedier side of London’s art scene with the foppish Charlie Mortdecai as our guide. Written in first person narrative Mortdecai often speaks conspiratorially to the reader, including us in in-jokes that we can’t always understand, suggesting that we would agree with some of his morally questionable opinions. He is cocky, wealthy, and judgmental – attempting to trick those he does not like into revealing their ignorance of the finer things in life. What he lacks in physical aptitude is balanced out by his manservant/live-in thug Jock. He seems to be one of the few people that Charlie has any lasting affection for and in some scenes their relationship has moments rather surprisingly bordering on tenderness.

The plot is somewhat all over the place as Charlie crosses continents in an attempt to deliver a stolen Goya. He proves himself to be inept and cowardly at times, Jock displaying unshakable loyalty as they find themselves in rather sticky situations. There is so much that is farcical in their tale that the moments of sincerity are often mistrusted.

Despite the alcoholic, misogynistic narrator whose belief system would have been outdated at the time of original publication, you can’t help but smile at moments while reading this. His brazen behaviour in the face of his nemesis Inspector Martland and the simple yet cunning techniques he uses to cover his crimes are amusing. There’s just about enough intrigue to keep your interest but the story arc is not strong enough to be truly gripping. Humour, snobbishness, and peril abound in this easy, light read that isn’t likely to linger long after reading.
Posted by Ramblings of a nobody at 23:54 No comments: 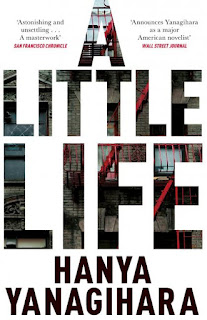 The opening chapters of A Little Life introduce you to four talented young men on the cusp of adulthood – William, JB, Jude, and Malcolm. In these early passages we are given snippets of their past lives, the roots of some of their insecurities, and a glimpse of the concerns and preoccupations that they struggle with. There is a certain focus on the forming of identity and their uncertainty of who they are and what they want to become. It is clear that they have come through some difficult times but it is nonetheless jarring when Jude, who remains something of an enigma throughout, comes to Willem in the middle of the night, bleeding from a self inflicted wound.

The story then begins to focus in on Jude with Willem the main supporting character, JB and Malcolm melting away into the background. That night we are introduced to Andy, Jude’s long-term doctor and friend. Certain recurring issues make their first appearance in these scenes. One aspect of the novel deals with responsibility – Andy’s ongoing dilemma as to whether or not he should have Jude committed, Willem’s responsibility to Jude, an unspoken understanding between the group of friends that he is the one who can help him best, and Jude’s own responsibility to those who love him, even if beyond his comprehension.

As the novel progresses we witness flashbacks to Jude’s youth, slowly revealing the abuse he survived, and giving us an understanding of how he has been shaped. It borders on frustrating to begin with – his self-deprecation when he is clearly loved and admired by those who know him. This frustration quickly evaporates when we come to know what he has been through and how remarkable he is. We see him struggle to open up to people, to understand that he can be loved. We also see his desire for control informed by the feeling that he has never had much, the sense that life is something that happens to him without him playing an active role. His physical injuries add to this and he attempts to hide how much he suffers and the potential help he will need as his condition deteriorates. This need for control in part manifests itself in his self harm and reluctance to accept help.

Jude’s story is devastating but it is not without its positives. He is incredibly successful, he inspires great devotion from Willem and Harold, his once teacher who becomes personally close. In a fascinating interview with Yanagihara in the Guardian she claims this was intentional, that everything is heightened. Yes, there are many incredibly upsetting scenes and detailed violence, but this is balanced by an excess of love and success. This deliberate exaggeration is rare in contemporary novels, but while the novel holds you in its thrall the technique feels entirely appropriate.

The story of Jude’s endless struggle to cope with life and intimacy, to attempt to come to terms with what has happened to him, will break your heart several times over. It is a consuming tale that will stay with you long after the final page. The characters feel alive and the closeness forced upon the reader is brutal but important. It does not allow you to look away or expect a quick fix and this makes it very real. An utterly devastating, brilliant read.
Pick up a copy:
Bookshop
Foyles
Waterstones
Posted by Ramblings of a nobody at 13:36 No comments: