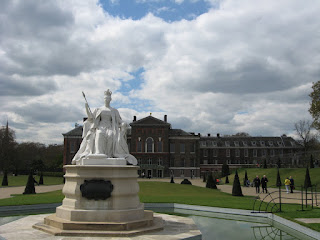 Kensington Palace reopened to the public on the 26th of March this year. I was most looking forward to seeing what Historic Royal Palaces had done with it, and was not disappointed. Although visitors use a side entrance, it is still an impressive approach, a statue of Queen Victoria looking out over Kensington Gardens, proudly marking the entrance to the palace which she spent much of her childhood in.
There are four routes to explore, all leading off from a central room surrounded by portraits of important members of royalty that have associations with the palace. 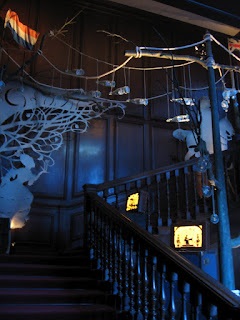 I chose to try the Queen's (Mary) apartments first. From the staircase which leads you up to them, I knew this was going to be something quite special. Lighting was kept low throughout (flash photography wasn't allowed so I apologise in advance for the quality of some of the photos), and sound effects used to bring the story to life. To wander through these apartments was to experience history in an entirely new way. It may not be to everyone's taste but I loved the mix of modern artistic additions alongside the fascinating historic objects. It created something quite magical. 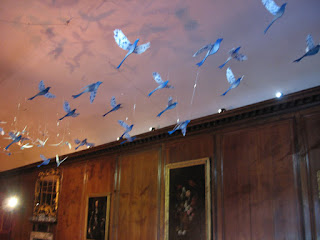 The Queen's gallery was the only large, stately looking room on this particular route. A string of birds hovering above the room (presumably, as I discovered from the guide book because she kept bird cages in this room) cast entrancing shadows along the wall, framing the portraits which line the wall. 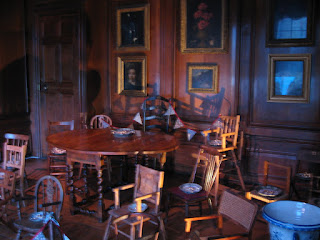 The next four rooms on this tour were smaller, and more intimate, some mainly showcasing historic objects, others with modern installations taking centre stage. The use of light, shadow, and sound effects throughout created an atmosphere which you don't often find in historic sites. 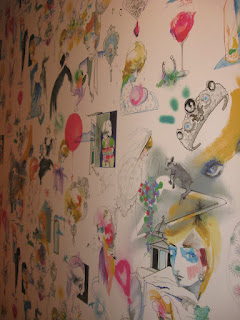 One of the interesting things about Kensington Palace is that it is still used as a royal residence today, and although it means a large part of it is closed to visitors it also means that it is not just a place of historic interest, but also somewhere where history is still being made. The next route I chose was the Princess Diana section. What Historic Royal Palaces have done particularly well is dealt with subject matter crossing several centuries, and displayed each section in a way relevant to the age, as well as being modern and forward thinking in terms of public heritage. Although I went straight  from a series of rooms, the contents of which were from the seventeenth century into an exhibition about a twentieth century princess, I was completely absorbed in each, and didn't once feel that the contrast was too stark. You are led into the world of the age which you are being shown.  The entrance to the Diana exhibition was lined 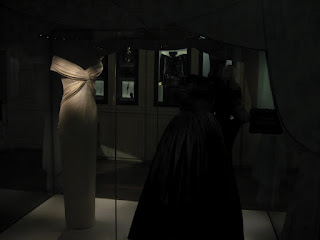 with this wallpaper, which I thought was fantastic, and really helps transport the visitor into the glamour of the room you're heading towards. Although only a small exhibition, there were some gorgeous dresses on display, and the photos of Diana around the room remind you of the tragedy that ended her life. Incidentally, whilst visiting Kensington Palace you can see the golden gates in front of which a sea of flowers were placed by the mourning public on hearing of her death. 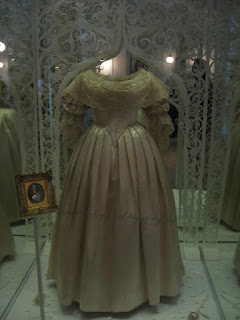 Next, I moved on to the Victoria tour. This begun in the room she held her first Privy Council meeting on the morning she became Queen. The room is dominated by a large wooden table, and there are shadows cast around the walls of men. It gives a real sense of how intimidating this could have been for the young Queen.

The next series of rooms are beautifully elegant, and I think it was during this route which I felt most aware of the fact history had really happened in these rooms, which is very special indeed. These rooms show Victoria in her happy marriage to Albert, and through to the room in which she would have played as a child. 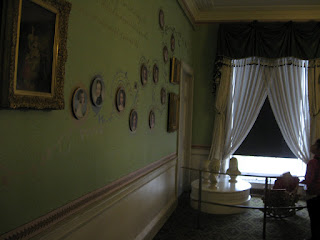 The Victoria route was probably the most informative in its narrative approach to history, walking you through her life; her biggest achievements, her heartbreak over the loss of Albert, the glory of her Diamond jubilee, particularly potent at this time as we approach our own Queen's diamond jubilee.
I particularly enjoyed one of the rooms on the route, though I admit I can't remember exactly what it was, but it was darkly lit, and full of cabinets of fascinating objects, and books, quite a cabinet of curiosity! 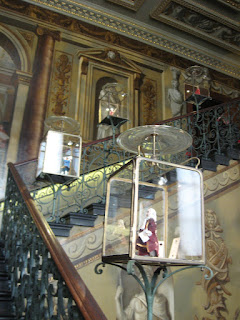 This led me on to the final, most traditional route, that of the King's State Apartments. Up an impressive stairway, and in to an imposing, stately series of rooms, there's a real sense of power and wealth running throughout. A series of figures leading the way through these rooms, giving a sense of the activities that would have taken place.
All in all a wonderful visit, Historic Royal Palaces have done a wonderful job, the palace is quite magnificent. My only slight quibble is that, certainly in some areas, I didn't feel I learnt an awful lot. I liked the fact there weren't signs up all over the place, ruining the atmosphere, but could have used a little more information. There were members of staff in most rooms, but having no specific question I wasn't quite sure how to strike up a conversation with them. Saying that, however, it didn't detract from my day at all, and having perused the guide book I feel I know a little more, and the visit was just wonderful. 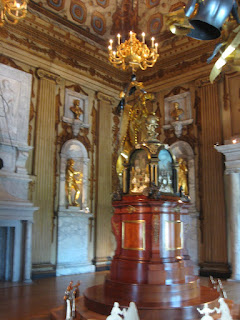 Posted by Ramblings of a nobody at 13:03