'The Son' by Michel Rostain 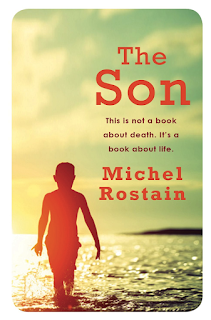 The acclaimed debut novel from Michel Rostain deals with the death of his adult son in a mix of fiction and memoir. The novel tells the story of his son’s death from the point of view of his son. I knew little more about this novel when I began it, and wondered how such a narrative technique would work. I was pleasantly surprised. Using the son to narrate the story gives him a character of his own, you forget that he has died. He comments on his parents’ behaviour and raises questions over how people treat the objects of the deceased – do those left behind have the right to go through their possessions, to try and learn things about their life that they wouldn’t have told them had they still been living? It’s an interesting technique that heightens the emotions. There are moments where it slips and becomes a little confused, mainly when there are long sections of dialogue, but generally he pulls it off well.

The subject of the story is of course utterly heartbreaking, and the reader is struck with just how painful such a situation is. I was struck by this most in the section describing the arranging of the funeral. It seemed cruel that so soon after such a bereavement they were forced to make decisions when they were barely able to think coherently. However, as other reviewers have commented, this is not a despairing book. There is hope, and there is humour, and many fond memories of their beloved son.

There is a feel to this novel of it being some kind of therapy for the author, a way to process what has happened, to make peace with it. It is painfully honest in its depiction of the emotions he goes through, of the ways he behaves which could come across as slightly crazy, but are all part of the grieving process. However, the overall message is of hope; that you can survive something as traumatic as the death of a child, that you can’t explain how, but you carry on, and you find ways of remembering and honouring their memory.