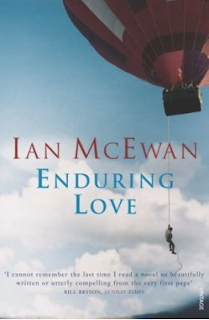 This post contains affiliate links. If you click through and buy I will receive a percentage commission at no extra cost to you.
This book has probably got one of the most famous opening chapters in modern fiction. Opening with a hot air balloon accident is certainly a powerful start to the novel. Instantly you are intrigued by the main characters, not knowing much about them but being shown that this one moment where this group of strangers have come together will not be the end of it for our protagonist, Joe.

Jed, another of the witnesses, becomes infatuated with Joe, phoning him, writing him letters, waiting outside his house, convinced that Joe loves him, despite being in a happy, long-term relationship. Or is this, in fact, all in Joe’s mind? The letters are, coincidentally, written in handwriting very similar to his own. Throughout the novel we are constantly led to doubt Joe’s narrative, as his partner, Clarissa, thinks he is losing his mind, the police won’t take him seriously, and he gets increasingly obsessed with the idea of being followed. You feel his frustration at not being taken seriously, and the isolation that ensues, but there’s always the doubt that Clarissa might be right, that his mind has created this situation as a way of coping with what happened. It’s not until the end of the novel that you find out definitively which characters are the ones to be believed.

It’s a clever novel, and it keeps you guessing right up to the dramatic conclusion. It’s an interesting portrayal of obsession, grief, and the dynamics of human relationships. I found some of the situations a little unbelievable, but overall it was a gripping, well-written novel. The appendices were also a nice touch to round off the story.
Pick up a copy:
Bookshop
Foyles
Waterstones
Posted by Ramblings of a nobody at 17:56