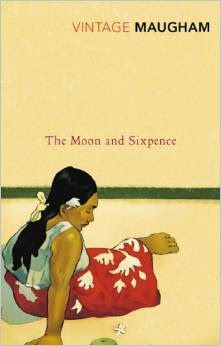 This review details some events in the novel that may spoil sections for those who have not yet read it.

The Moon and Sixpence tells the story of Charles Strickland, stockbroker turned artist who gives little explanation when he leaves his life in London to while away his hours painting in Paris. Maugham took his inspiration for the character from the life of Paul Gauguin, but there are reminders throughout that this is not Gauguin’s story, an obvious example being that it is specifically mentioned that Strickland had never met Van Gogh.

Our narrator is an author, writing a book about Strickland’s life. This has an impact on the way he writes the story, and he admits that he embellishes and interprets what Strickland actually said. In his opening explanation as to why he feels it necessary to add a further book to the existing selection on the topic he explains his own opinions on art and that he believes the artist puts part of themselves in their work – an opinion worth remembering throughout as he attempts to dissect Strickland’s personality. We do, however, learn more about our narrator’s character than his subject in the opening chapters. The book as a whole is an interesting examination of the complexity of individual psychologies and we learn a lot about him through his interaction with others. He comes across as socially awkward and naïve with set ideas about what  constitutes appropriate behaviour at different stages of life.

He judges Strickland for his behaviour and lack of concern, increasingly seeing him as an odious man and he has no qualms in telling him that he finds him despicable. Strickland does not care for the opinions of others and points out that it is really this lack of power that distresses the narrator. There’s something oddly admirable about Strickland’s total absence of care in regards social pressure and expectations, although there’s no denying that his behaviour is far from ideal. He is a complex character; both incredibly straightforward and upfront but with unexpected passion and hidden concerns. For all his flaws he seems to understand deeply some truths about human nature that others do not. Any sympathetic feelings toward him do tend to dry up as the novel progresses and he seemingly heartlessly breaks up the marriage of someone who has shown him nothing but kindness, and feels no pity when it ends in death.

Strickland is often described as having sensual features and he has a lot of pent up lust that he has to relieve on occasion, a fact he seems to resent as an unworthy distraction from his art. He does at least see lust as natural, love on the other hand seems to him to be a weakness. He does not believe Blanche Stroeve loved him, merely that she wanted to possess him, and thinks her foolish for her actions. He shows no remorse or concern for either her or her husband, Dirk.

On leaving his wife, Strickland felt no guilt at forcing her to fend for herself, and indeed her reaction to his departure suggests he may not be entirely wrong in his views on the nature of relationships. She is greatly concerned with what people will say, and remains ashamed of earning a living (she is by no means a feminist figure). In many ways they are an incongruous pair, he caring nothing of what people think of him nor for physical comfort, but for all their differences they do share a devotion to different forms of art, albeit a passion that manifests itself in very different forms.

Despite his affection for Strickland’s wife, our narrator is surprised by her concerns and disturbed by the assertion that had she been called to her husband’s deathbed she would willingly have gone and cared for him. This he sees as a strange passion in women, almost as if they look forward to being able to play this role. He learns a lot about the world and the complexity of personal relations interlinked with the outside world from his dealings with Strickland, and seems to mature because of it.

The Moon and Sixpence is full of absolutely fascinating characters whose backstory and the impact this has on their psychology is gradually revealed throughout. Rarely have I come across a novel that is so sage in its approach to its characters’ mental development. Despite the constant reminders that we have an unreliable narrator who does not know all the facts and elaborates on those he does, you’re left with a very clear sense of the varied characters. Strickland may seem despicable in his actions but its also clear that his compulsion to paint enslaves him, making him an intriguing protagonist.


This was the first of Maugham’s work that I read, and it left me eager to read more.
Pick up a copy:
Bookshop
Foyles
Waterstones
Posted by Ramblings of a nobody at 23:30