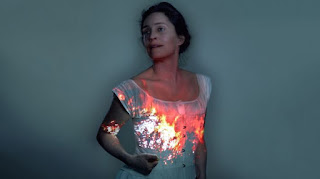 The stage is set with a wooden framework and ladders, musical instruments nestled at the centre of this construction. There are no grand sets, everything is very minimal, and yet the audience is drawn in, very much present with the characters, in Thornfield, at Lowood. The lack of heavy, claustrophobic period sets indicates that this is going to be very much about the people, about the heart of the story and the issues it touches on that make it endure through the ages.

Originally staged as a double play at the Bristol Old Vic, it has been condensed into one show for the National. A reasonably long play admittedly, but so enthralling it doesn’t feel it. There are no younger actors to depict Jane in her youth, we are instead greeted with Madeleine Worrall moving around the stage, emitting eerily accurate baby cries. Time is taken on her younger years, allowing the audience to understand the influences on her psychology. The oppressive red room, the terror she feels when locked inside, the intimidation and humiliation at Lowood are all there, as well as the loss of loved ones as they descend below the stage, this physical act a powerful representation of death.

Felix Hayes as Rochester is commanding and has great presence. His chemistry with Worrall is spot on and the energy in some of the more impassioned scenes is quite something. The ensemble is central to the success of this play – the small cast taking on multiple roles regardless of gender or species. They provide a voice for Jane’s conscience and skillfully give a sense of the different environments.

The lighting and use of music throughout are important for setting the mood as well as adding emotional depth. Melanie Marshall’s presence throughout is an interesting move, her Bertha all the more intimidating for her calm presence. The use of Gnarls Barkley’s Crazy as her final song has the potential to feel quite out of place but her version is strong, it works brilliantly.


An altogether wonderful production of a much-loved novel. It may look different to how you’d imagine but it captures the very essence of the novel. Tickets are limited, but if you have opportunity you’d be fool to pass it up. I’d happily experience it again. Playing in the Lyttelton Theatre until 10th January, 2016.
Posted by Ramblings of a nobody at 00:28