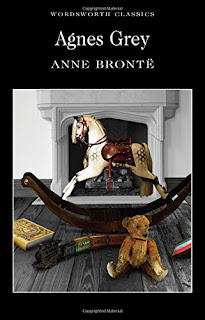 Anne Brontë’s first novel, Agnes Grey, is in part autobiographical. Agnes is the daughter of a clergyman in the north of England and, in wishing to aid the family’s finances takes a job as a governess with two families not entirely dissimilar to those Anne found herself with. The Bloomfield children are vile, spoilt children whose behaviour Agnes is unable to improve. There is a horrifying scene with her young charge Tom whereby he is planning how to torture some young birds. Agnes drops a stone on them to save them the horrors he had planned. His guardians do not understand her reasoning, promising him more innocent victims, and claiming they are put on Earth for our amusement. This distressing scene seems to show their opinion of those they consider inferior and does not bode well for their relations with young Agnes. It also goes to show how impossible her task is when faced with a family that positively encourages such behaviour. The unreasonable demands put on a governess are clear and you feel the frustration of being held entirely accountable in a hopeless situation.

Her second post, with the Murrays, is a slight improvement. Matilda and Rosalie are older and less physically ill behaved but they nonetheless seem to find making life difficult for Agnes something of a sport. She is expected to be on call at all times and must submit to the whims of the young Murrays. They have a strong sense of entitlement and feel little empathy for those less fortunate than themselves. This is evidenced not only in their treatment of Agnes but also in the delight they take in visiting poorer neighbours and mocking them. Rosalie also shows a great disregard for others in her cruel treatment of potential suitors, giving them attention only as long as it amuses her, with no intention of marrying them.

It is clear that Anne wanted to express the hardships endured by a governess and the contempt bred by privilege. In Rosalie’s unhappy marriage we see the result of such spoiling in childhood. They may have more money but in the end are not genuinely happy. The moral message seems to be that those who work hard, are honest and respectful, are given their quiet  contentment eventually.

A short, uneventful read with what was at the time a revolutionary message. Originally published as part of a three volume set alongside Wuthering Heights, it is not hard to see why it was overshadowed.