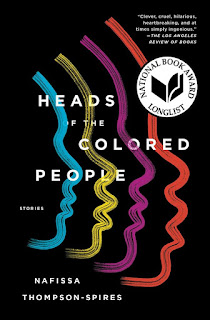 Thompson-Spires’ debut short story collection is darkly humourous and thought provoking. Some of the characters appear in multiple stories and there’s a good sense of cohesion and neat circularity. The opening story jolts you into the seriousness of the content with an innocent black man being shot by police. We then move on to petty office politics, the pitfalls of social media obsession, and competitive parents point scoring against each other. The subjects of the stories have wide appeal and relatability but the normality of the lives depicted make the painful truths that much more stark.

For the younger characters especially there’s a certain amount of conflict regarding their identity. They find themselves in predominantly white environments and some become conflicted, keeping different aspects of their lives separate, adjusting the way they speak or do their hair depending on who they’re spending time with. The book gives us an insight into the challenges facing black people in America today and the ways in which they navigate this.

Relationships are examined in almost all of the stories. We see a mother and daughter falling out over disagreements on YouTube content and the false perfect family image they show to the world. There’s teens struggling to find true connection in a world that never switches off and mothers struggling to look after their children, worn down by the tragedies they witness every day. This is a thoughtful collection that’s full of cutting observations on the modern world. The stories are engaging and sometimes shocking, with a host of characters that capture the imagination. A brilliant read.
Posted by Ramblings of a nobody at 23:07