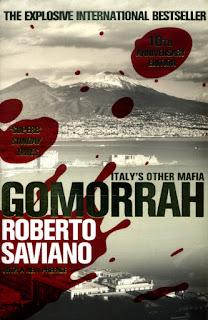 Saviano’s bestselling exposé of the Camorra, the mafia that dominates Naples and the surrounding regions, is full of unimaginable violence, ordinary people struggling to make a life for themselves, and teenagers being dragged into this dark underworld that will likely see them dead before they reach forty. He shows how the Camorra hold the lives of Neapolitans in the palm of their hands. Many work in unauthorized factories that legally don’t exist, meaning that they are entirely reliant on them for mortgages and leases. We learn also of the escalating mortality rate from cancer due to the dumping of illegal toxic waste and that they test new guns by shooting at shopfronts. For those living under the Camorra there are reminders of their position at every turn.

It is the individual stories that really hit home. Many knock-off brand clothing is produced in Southern Italy, of high quality but selling at a fraction of the price. The workers are highly skilled yet are paid a pittance. For one, who creates a beautiful suit for Angelina Jolie, the recipient unknown when he made it, is a source of both great pride and sorrow when he sees her wearing it on the red carpet on TV. A couple of months later he is assigned as a truck driver, ruining his circulation and therefore his ability to make fine clothes. Another particularly harrowing scene is that of the guinea pig drug addicts used to test drugs are safe before being put on the market. Abuse of the addicts’ desperation means they know there’ll always be someone willing even though they know there’s a high risk of death.

The book is full of detail and names who appear only briefly before being killed or sent to prison. There is never a shortage of members waiting to become a boss, and violent power struggles are a part of daily life. With so many vivid descriptions of cruel killings and torture it is a stark reminder that even in such acceptance of the dangerous lives they lead there are still some deaths, some brutality, that breaks through and shocks.

An interesting, at time gruesome read that can feel a bit of a slog. A detailed account of the brutality of life in the System by one who places himself at crime scenes and in warehouses to give a first hand account of the Camorra.