My Name Is Why, Lemn Sissay 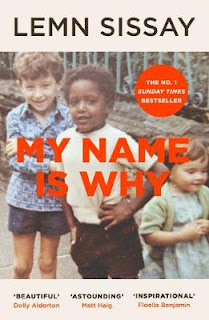 In 1967 Sissay was born to a young Ethiopian woman in Wigan. The authorities removed him from her despite her refusal to sign adoption papers. He was given a new name, a fact he didn’t discover until a teenager, which made reuniting mother and son more difficult and cut him off from his origins. Official records show that his mother tried to get him back after she’d returned to Ethiopia to be with her dying father, but attempts were blocked. He was never told that his mother wanted him, loved him, and he grew up believing that he was all alone in the world. He was placed in a foster family and subsequently a series of children’s homes that damaged his sense of self-worth and were unhelpful during his periods of depression.

The book consists of his own recollections interspersed with copies from the official files kept on him, which he fought for three decades to be allowed access to. They reveal a system that used bureaucracy to keep him from his mother, for example, sending her a letter with a response deadline of one month when it took that long to reach her. The injustice of ripping him from his family was further exacerbated by the constant interpretation of positive reports from school as being special treatment because of his race rather than acknowledging that he was genuinely a personable and bright child. In reality, he was on the receiving end of a lot of negativity because of racism.

It was not only the officials chipping away at him. The foster family he was with from birth to around the age of twelve were strictly religious and were unwilling to compromise or accept any differences in behaviour. They taught him that he had evil inside him and that it was his fault he had to leave because he didn’t love them. He was removed from the only family he had ever known and made to believe it was his fault. His social worker, at least, did seem to be on his side, but stuck in a system distinctly lacking in care where his successes were twisted into negativity, it was hard to move forward.

His darkest days were yet to come, when he was sent to Wood End, a remand centre where abuse was common, while a new home was supposedly being sought for him. He includes responses he received from a piece he wrote about his time there, full of trauma and ongoing mental health issues because of the appalling treatment they endured.

A book that will fill you with a sense of the unforgivable injustice meted out to an innocent child. This is an eye-opening account of life within that care system that lays bare the deception, manipulation, and abuse, that proliferates within the system. Sissay’s determination and talent have meant he has made a success of his life despite all attempts to limit it.