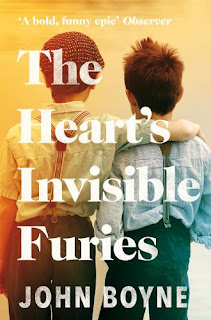 Boyne’s powerful novel takes us on a journey through Ireland from 1945 to 2015 in seven year increments. The book opens with sixteen year old Catherine Goggin being publicly shamed in church for having fallen pregnant out of wedlock. She’s forced to leave her hometown to fend for herself in Dublin while the man responsible experiences no repercussions. Our narrator, Catherine’s baby, is born in the midst of a violent homophobic attack that will sadly be mirrored later in his life. The rest of the book follows Cyril through life, struggling with his sexuality and the unbending, restrictive morals of a country firmly in the grasp of the Catholic Church. We will follow him to Amsterdam and New York, seeing shifting attitudes in other countries while Ireland stubbornly refuses to ease the harsh views and laws that cause misery to many.

The characters are brilliantly drawn. Cyril's adoptive parents, Maude and Charles Avery,  seemingly have no interest in raising a child and remind him constantly that he isn’t ‘a real Avery’. He is fascinated by their relationship growing up, ‘Two people who could not have been more ill-suited to each other’s company had somehow managed to find each other and sustain something resembling a relationship while apparently feeling no interest or affection for the other whatsoever.’ It is hardly surprising then that they don’t treat the latest addition to their family with much more tenderness. Charles shows disregard for his wife, having affairs and never bothering to read the books she writes. Maude has a novel approach to writing, not reading herself, and entirely against being widely read, she is furious when Charles’ run-in with the law push her books up the bestseller lists.

Catherine appears briefly in many sections throughout, but fleetingly and tantalisingly close to her son without realising it. She proves herself to be strong-willed and loyal, successfully carving out a career for herself in the tea-room of the Dáil Éireann where she was fortunate to meet a woman willing to give her a job while heavily pregnant. There are moments where her sadness over her lost son begins to emerge only for the moment to pass before it can develop into a conversation that might reveal their true identities.

Cyril himself is shy and lacking in confidence as a child and young man. He meets Julian at the age of seven and is blown away by his confidence and sexual knowledge. From the day they first meet, Cyril is drawn to him, his feelings developing over the years to encompass lust and unrequited love. They remain friends for many years but Cyril always keeps his feelings and sexuality to himself, until they come to a dramatic climax that will change their relationship forever.

There’s so much in this novel, but the overarching focus is the changing attitudes to homosexuality and the terrible injustices that law and Church impose. For a long time Cyril believes his feelings for Julian are just a phase, but he is eventually forced to admit that they’re not. He goes to a doctor for help but is told he can’t be a homosexual because there aren’t any in Ireland, before subjecting him to a cruel treatment designed to create negative associations with erotic thoughts of men. Cyril considers killing himself on a number of occasions, denied the opportunity for loving sexual interactions. He has sex with hundreds of men, rarely knowing their real name, and always with a sense of urgency and a fear of being discovered. The idea of taking a man home with him, of having sex in a bed, and spending the night together feels an impossible dream.

By 1980, with his life in Ireland in tatters, we find Cyril living in Amsterdam where he finds a stable partner in a city where they can walk along holding hands without fear of what will happen to them. Jump forward to the late 1980s and New York, where the Aids epidemic is taking hold and shifting attitudes toward fear and hostility. The President refuses to acknowledge what’s happening and Cyril and his friends are removed from a restaurant for discussing the disease. It is a sad step backward, with him noticing that even friends seem uncomfortable with displays of affection between him and Bastiaan. In his role as a volunteer at the hospital we are witness to the isolated deaths of those shunned by family or too afraid to tell them what they’re suffering. The book ends on a slightly more positive note with the successful referendum on legalising same-sex marriage. The final sections are nonetheless heart-wrenching as Cyril nears the end of his life, reflecting on those he’s loved and lost, and repairing relationships at home.

This is a book that deals with some heavy issues and offers far more depth than can ever be conveyed in a short review. Despite the themes and suffering within, there’s also a lot of humour, sometimes revealing a deeper reflection but in a way that will put a smile on your face. This is a book that will keep you up at night reading ‘just one more chapter’ and stay with you for a long time after turning the final page.

Pick up a copy:
Bookshop
Foyles
Waterstones
Posted by Ramblings of a nobody at 15:03