Such A Fun Age, Kiley Reid 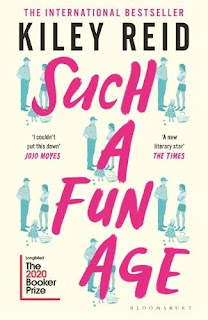 The Chamberlains have recently moved to Philadelphia. Alix runs a successful blog which began with her writing letters to companies asking for free products and which has morphed into a pseudo-feminist career and a book deal. Her husband Peter is a news anchor and instigated the move away from New York City. Alix maintains the illusion that she  still lives there across her social media channels. With a lively three year old and a new baby to look after they hire Emira to take care of the children so Alix can make progress with her book, despite the fact her drive seems to have evaporated since the move. Emira is in her mid-twenties and works part-time in an office when not taking care of Briar. She enjoys babysitting, knows she’s good at it, but also feels the pressure of her friends’ lives outwardly progressing quicker than hers, and the need to find a more stable job with perks like health insurance.

One night, while Emira is at a friend’s party, Alix phones to ask her to take Briar for a few hours, there’s been an incident and they’d rather their daughter wasn’t there when the police arrive. The catalyst for the incident was a casually racist comment Peter had made on-air that day. Alix is already worried that Emira might have seen it, but what follows will send her spiralling into an obsession to show how different she is from other privileged white women in a way that is deeply uncomfortable and inappropriate.

While out with Briar in an upmarket supermarket Emira is accused of having kidnapped her, the altercation only being resolved when Peter arrives to clarify the situation. Another customer, Kelley, films the incident and encourages Emira to make it public, the complete opposite of what she wants. His concern at first might seem genuine albeit a bit pushy, but it soon becomes clear that his preoccupation with showing how woke he is is actually just as toxic. The event that night is the most overt incident of racism in the novel but the book is littered with micro aggressions, unconscious bias, and the privilege of people who believe they’re acting with the best of intentions. It is at times uncomfortable reading and there are many times where you wish the characters would take a step back and realise the consequences and realities of their actions.

Emira is a strong, likeable character. She’s defensive of her privacy, avoiding social media. The mid-twenties pressure to feel like you’ve got everything figured out is relatable, as are the close friendships she has that are more like family. You want the other characters to stop trying to mould her into their idea of success. In the latter part of the book she contemplates her relationship with Briar and the aspects of it that she finds fulfilling and satisfying. She’s also torn between hoping that she grows into a self-sufficient adult and the dread of knowing she’d likely end up paying someone for the emotional labour and the cycle of privilege would continue. Emira cares a lot for Briar, and although she knows she’s being paid to love someone else’s child for them, she cares about that child enough to make it difficult to walk away. When Alix starts her campaign to get to know her she finds it uncomfortable and wonders at the privilege Alix doesn’t seem to realise she has. Emira sees that Alix can be a good mother so believes it to be a choice when she’s not.

Alix is a conflicting character. Early in the book she’s almost sympathetic - lacking confidence in herself and her blog, struggling to adjust to the family’s new life away from her support network and the lifestyle that makes her feel as if she is someone. As the novel progresses however, we see how blind she is to her own actions, how unhealthy her obsession with hiding her privilege is. When her connection to Kelley first crops up it claws back a bit of sympathy, but there’s two sides to every story and it’s not always clear whose version you should believe. Kelley is something of an enigma from the start. Overly confident and blinkered in his views, his cocky attitude twinned with Alix’s revelation make you suspicious, yet he can be convincing.

This is an interesting read that subtly weaves a lot of different threads together, and the title could just as easily refer to Emira’s age as to the time period we’re living through. It shines a light on the pitfalls of social media, privilege, racism, and the role class plays. The characters feel natural and believable, even if you wish some of their actions were less so, this is a promising debut.

Pick up a copy:
Bookshop
Foyles
Waterstones
Posted by Ramblings of a nobody at 07:00