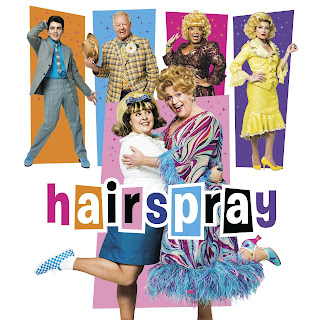 Walking in to the Coliseum on Friday night you could feel the excitement in the room, even before the curtain went up. Theatre is back, and what a glorious return Hairspray is. I knew a lot of the songs but had somehow never managed to see it before, either in a theatre or on the big screen. The next two and a half hours were everything I could have hoped for and more. The story is one of acceptance, self-love, and the fight for inequality, and has a lot going for it. The cast were on fine form, and when Les Dennis got the giggles during a duet with Michael Ball, it reminded me how wonderful it is to be at a live performance, that no two shows are ever quite the same.

From the opening number to the final song this was a high energy, colourful production. The costumes were lavish, the singing pitch perfect, and the characters, although occasionally cartoonish, nonetheless evoked genuine emotion and took the audience along with them. I can’t think of a more perfect show to return to musical theatre with, everyone left with huge grins plastered across their faces, and I think it’s a safe bet that I wasn’t the only one dancing my way home. 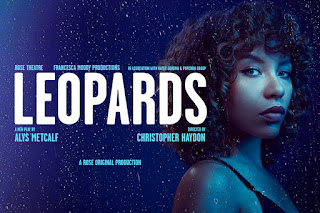 Leopards, at the Rose Theatre in Kingston, couldn’t have offered a starker contrast. Dark,
intense, and thought provoking, seeing these two shows back to back demonstrated the versatility of theatre, and its ability to convey important messages in very different styles. With  a cast of two, a simple set, and no interval, Leopards demands your attention. Young, ambitious Niala (Saffron Coomber) meets celebrated charity leader Ben (Martin Marquez) in a hotel bar, looking for a new career direction. After some stilted conversation in which you question the quality of acting (before realising later that any awkwardness was entirely intentional), they end up in a bedroom.

What unfolds is deeply uncomfortable, as the characters are forced to face up to issues of consent, grief, and personal responsibility. The power balance shifts back and forth and you question the assumptions made during the scene in the bar. There are so many twists and turns that it’s hard to write about without spoilers, but trust me when I say this is a play that will leave you thinking about it long after leaving the theatre.