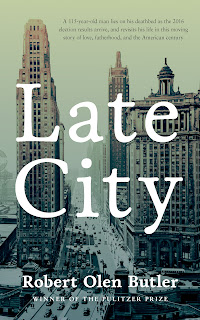 This post is part of the blog tour for the book. Thank you to No Exit Press and Random Things Tours for providing me with a copy of the book in exchange for an honest review.

As Sam Cunningham, a 115 year old First World War veteran, lies on his deathbed on the night of the 2016 US election he is visited by God. A God that behaves not as you might imagine, but who reveals that humans have their own power and that often their behaviour is as much a mystery to him as it is to their fellow humans. He commands Sam to re-visit moments in his life as though he did not know the outcome. Despite the many years that have passed we see very little beyond the Second World War, a pivotal moment in his family’s life.

Largely chronological, we see glimpses of his Louisiana childhood, with a father convinced of the ideal of masculinity and who trains him to be a ‘real man’. He is violent and emotionally repressed and leaves a young Sam desperate to make him proud. Sam’s going to war shifts the dynamic between them, he has achieved something his father never will, and the power balance becomes more complex.

In realising his need to live life on his own terms, he separates himself from both parents and moves to Chicago to pursue his journalistic ambitions. When he eventually becomes a father himself he is determined to avoid the mistakes of his, but in so doing fails his son in other ways, and ultimately we see the outcome is not all that different. Despite Sam’s somewhat progressive views in some areas he struggles to let go of prejudices that were drilled into him from a young age.

We see, during his recollections of his time in the trenches, that his age and upbringing make it hard for him to reconcile the behaviour of men when others are breathing their last. His colleague and sort-of mentor steps up and offers dying men the comfort and affection they require in those moments. He tries to explain it to Sam but he struggles to comprehend, despite seeing horrendous suffering. We later learn whether he is able to step up when needed, not just in the trenches but in his life during peace time.

From his early recollections we see he is uncomfortable with the racism that was normalised by those around him. Indeed, race relations form a background to many of his memories, although do not become as central as you might expect from their early inclusion. At times it feels merely a vehicle to get him a job at a progressive newspaper and then fades into the background. Perhaps it is also intended to give us a glimpse into the complexity of his world view, that he is capable of going against the grain of his time.

This is an interesting book that will make you think more deeply about life and death. Sam’s long life is heralded as remarkable by others, but for him it is not a blessing. He has lived over a quarter of a century in a nursing home and has had more time than any would wish to contemplate mortality and his own failings. The characters’ trajectories can be a bit predictable but there’s no denying there are moments of real power and contemplation. One for those who do not shy away from ruminating on human failings and fragility and questioning what it really means to have lived a full and successful life. 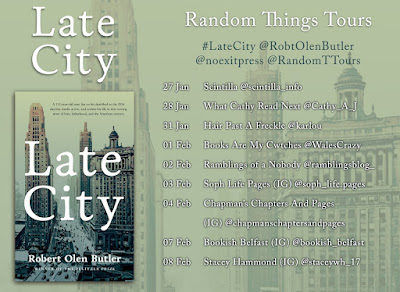