One of the many things that I love about summer is the fruit that grows during it. Although the weather has hardly been very summer like the past few weeks (not only have the leaves on the trees started turning shades of red and orange, but I was walking through a park last week which was strewn with leaves, all very autumnal) but my strawberry plants are still producing tasty fruit, and so I was inspired to make this. 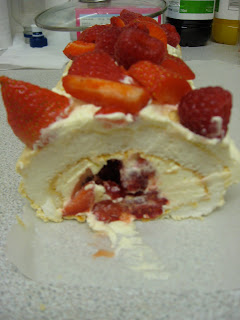 Having never made meringue, or a roulade before it was something of an experiment, and took three goes to get right, purely because I had no idea how long, or what temperature at which to bake the meringue. Turns out you bake it on a higher temperature for not so long when making a roulade but on a lower temperature for a long time when making it for other uses.
Anyway, here’s how I made my successful one:
Not as complicated as you would imagine, happy eating! 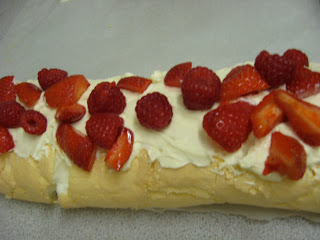 Posted by Ramblings of a nobody at 15:23