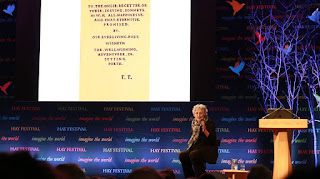 Germaine Greer led a close reading of four of Shakespeare's sonnets. She started the session by introducing Shakespeare as poet and discussing the printing of the sonnets. She pointed out that although today he is best known for his plays, during his life he was famous for his poems, indeed he may have been quite obscure as a playwright, not an uncommon situation for members of the profession at the time. He shot to fame in 1593 with Venus and Adonis which went through at least sixteen editions before 1643. As he wrote the poem in the vernacular women and slaves could read it, giving him a much broader readership. His sonnets were published in 1609 and only thirteen of the original editions survive. Greer warned against taking the text to be entirely accurate, likening it to a fossil. Much of this unreliability comes from the bad printing of the originals, which were hastily and messily produced. In addition, Shakespeare did not see it through the press as he had with Venus and Adonis.

The first sonnet to come under Greer's close inspection was sonnet 57. She pointed out that it begins with a question, as if we have dropped in mid-conversation, evidence that the sonnets are like mini plays. The tone is domestic, hinting that the speaker may be a woman. In Elizabethan times women couldn't follow their husbands unless called by them to do so. Greer questions whether or not it is slightly over-dramatized and remarks on the unconventional structure - the two parts of a sonnet are meant to contrast, but here they do not. She also takes issue with the final rhyming couplet, a common problem she sees in Shakespeare's sonnets, that they don't quite fit with the rest of the poem, suggesting that he should perhaps have used the twelve line form instead.

She focussed briefly on sonnet 94 which she sees as having a completely different pace to 57. The  subject being of people who manipulate others taking the glory while those who show their emotions are losers. This she sees as relevant to today, being particularly evident on social media. Greer concludes her discussion of sonnet 94 by highlighting the similarities between psalms and sonnets in that they are addressed to someone who is away, who will not hear or respond.

The final sonnets to gain her attention were 110 and 111. 110 has an air of cockiness about it, a feeling of the cavalier. The speaker is saying that by having relations with others they have realised that the subject is their best love. 111, by contrast, reads more as an apologia in which the speaker bemoans their lack of integrity and having fallen into what people think they are.

To host a close reading with such a large audience is no mean feat but Greer handles it well, providing an hour of entertaining, engaging thought. She left us with the challenge to learn the sonnets by heart, a challenge I'm tempted to take on.

Caitlin Moran spent an entertaining hour talking to Stephanie Merritt about her latest book Moranifesto,  which lay the way clear for discussion of pretty much anything. She gave her opinions on the Internet - an invention that she sees as extraordinary for its ability to allow people to communicate unmediated for the first time. She spoke of its benefits of connecting people, reducing feelings of isolation, and its power to help bring about change. That's not to say it's not without its problems of course, she admits that it is still a baby and has its tantrums but that it will mature. She also spoke of the importance of girls learning to programme. In the digital world it is the language of the future and if you don't know it you will be excluding yourself.

Talking of exclusion, she moved on to the narrowing of voices in the media. She decried the uniformity caused by the current culture of lengthy spells working for nothing to gain experience, excluding all but those whose families are able to support them while they do so. She pointed to the loss of libraries in having a huge impact on the widening of this divide. Before I go off on a vociferous rant in agreement on the state of the employment market and the crushing loss of one of the public's most valuable commodities I shall leave you with Moran's excellent statement - equality is not a luxury, it is absolutely essential for our happiness and progress. 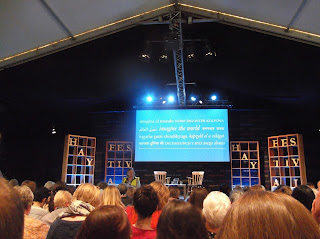 The end of my Hay experience this year came with John Crace and John Sutherland portraying the Brontës in very different styles. Crace performed a short parody of Jane Eyre which drew a fair few laughs from the audience. Staying with the novel, Sutherland's discussion was somewhat darker, touching on an aspect of the historical context that had never occurred to me before. We know, of course, that Bertha is not English, but he goes further in the thought process by considering where Rochester's fortune comes from - Jamaica, linked to slavery. Even further still - where does Jane's eventual inheritance come from? Madeira, again from work reliant on the toil of slaves. This puts a rather different spin on their 'happy' ending.

In his hotchpotch overview of select academic thought on the Brontë sisters Sutherland's focus rests predominantly on the defiant nature of all three. He points to Patricia Beer who highlighted the defiance of the well-known phrase 'Reader, I married him.' She married him, not the other way round, not an even 'we were married'. At the time of publication this would have been a shocking concept.

Emily is known as of fiery temperament and with little interest in social customs, but Sutherland claims that what she left in her second novel was so shocking that Charlotte is suspected as having destroyed it. One can't help but wonder if given the chance she would have done the same to Wuthering Heights, as both she and Anne were shocked by the content as they worked on their novels alongside each other (thank goodness it did not suffer the same fate!). Her second novel, of which I knew nothing previously, seems set to remain a tantalising mystery. He spoke of her killing herself, a questionable assertion, by refusing to eat, that she'd obviously found something in the world she couldn't cope with.

He turned finally to Anne, the sister so often over-looked in the face of the passionate, unforgettable characters created by Emily and Charlotte. Sutherland claimed that she was the most disobedient of the three, an assertion that sparked questioning murmurs from the crowd. Calmly, he explained that in her final weeks she refused to go to her sick bed but instead demanded that she go to Scarborough via York. Testament to her strength of determination that it was in Scarborough that she spent her final moments, and to Charlotte's charity in burying her there, where she had been happy, rather than bringing her back to lie with the rest of the family at Haworth.
Posted by Ramblings of a nobody at 23:16