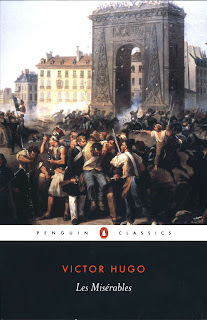 This post contains affiliate links. If you click through and buy I will receive a percentage commission at no extra cost to you.
Victor Hugo’s epic Les Misérables is a broad examination of the lives of struggling citizens of France in the early nineteenth century, and a polemic against a society where people are so carelessly abandoned by the State. Jean Valjean, the unifying character, is a complex man whose good intentions were forced out of him during his harsh and intolerable captivity. His crime was little more than desperation to relieve the suffering of his loved ones, and his ever present determination to escape, however slim the chance of success and however high the penalty. Readers will easily be led into sympathy, and feel the hopelessness, the injustice of the legal system. He emerges with a broken soul, all ability to love seemingly crushed. His encounter with the Bishop of Digne stuns him, his kindness a sudden bright light that dazes Valjean after so many years of darkness. It is this which allows a return to empathy and encourages what becomes a life led selflessly.

Fantine, an innocent girl who places her heart with the wrong man, ends her life tragically when she finds herself pregnant and abandoned. On meeting Madame Thenardier she sees a solution to her troubles, thinking she has found a loving family to care for her beloved child, Cosette, while she works hard to support her. She suffers a double misfortune as the Thernardiers prove to be of deplorable character, only interested in what they can gain. Her workmates also prove to be unkind, causing her problems for the sake of it. She soon finds herself destitute, relying on her body to provide for the ever increasing demands of the Thernardiers. It is heartbreaking to see her resolve to suffer so much with the only comfort that her sacrifices are granting Cosette health and happiness when we see how despicably she is in truth being treated.

Valjean, now in a position of some power and wealth, comes to hear of Fantine’s story and takes on the responsibility of care for Cosette. He sees the Thernardier’s for what they are and takes Cosette away from them, making enemies in the process. Without ever explaining the reason to her, he and Cosette hide from the law, and most especially Inspector Javert, who seems incapable of understanding life beyond the confines of the law.

A whole host of characters are introduced in relation to the events surrounding Valjean and his adopted daughter. The benign Marius whose morals lead him into a life of struggle, reluctant to accept financial help, and bent on finding Monsieur Thernardier with the aim of repaying the kindness he believes was shown to his father when injured at the Battle of Waterloo. Valjean is suspicious of the young man, both for his constant fear of being followed and watched, but also for the risk of Cosette falling in love. His past life haunts him to the end.

The Thernardiers reappear many times throughout, sometimes under different guises, and we see how they treat their own beloved daughters when hard times hit. The contrast between Cosette’s life and that of the once more privileged family is stark, a fact that enrages Madame Thernardier. This contrast is made even more apparent when you realise the street urchin Gavroche is also a Thernardier, although he is left to fend for himself and seems to have avoided the undesirable family traits. He is a shining example of generosity and wisdom far beyond his years. There are few scenes more heart wrenching than his demise, and the following treatise on how easily lost children can be sucked into the city and made invisible, struggling to survive in a world that only punishes them for their attempts to be fed and sheltered.

It is impossible to do justice to the breadth of this novel in so short a space. The characters may be a little exaggerated, which can be frustrating at times, and there are many lengthy digressions (some of which have mercifully been moved to appendices in this edition) but it is a powerful story with characters you can’t help but feel for. The sheer length allows the characters to age and develop, experiencing the upheavals of attempts to revolutionise France. An historical novel when it was published, its message is no less relevant today.

Pick up a copy:
Bookshop
Foyles
Waterstones
Posted by Ramblings of a nobody at 21:33