The Age of Reason, Jean-Paul Sartre 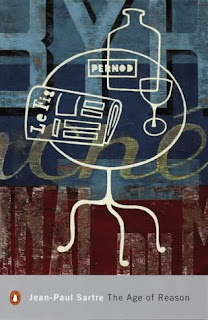 The first in Sartre’s Roads to Freedom series, The Age of Reason introduces us to Mathieu Delarue and his circle of friends in Paris, 1938. He is a philosophy teacher and obsessed with the idea of freedom, refusing to commit to his mistress of seven years, Marcelle. When he accidentally gets her pregnant he is forced to question his life decisions as he tries to raise the required sum for a relatively safe abortion. The action takes place over only a couple of days, a surprising fact to be reminded of when it feels so much has happened.

We never see Mathieu teaching but he does spend time with young students – Ivich who he loves and Boris who is so obsessed with youth he is convinced he will kill himself when he reaches thirty. They are immature and shallow and yet Mathieu clings to their company as a way of holding on to his now fading youth. His brother Jacques points out that his determination to retain freedom is really an attempt to escape responsibility and commitment.

‘I should myself have thought,’ said Jacques,’ that freedom consisted in frankly confronting situations into which one had deliberately entered, and accepting all one’s responsibilities. But that, no doubt, is not your view; you condemn capitalist society, and yet you are an official in that society; you display an abstract sympathy with Communists, but you take care not to commit yourself, you have never voted. You despise the bourgeois class, and yet you are a bourgeois, son and brother of a bourgeois, and you live like a bourgeois.’ (p.107)

In reality Jacques is little better than Mathieu. He lived carelessly and selfishly until the opportunity to marry into wealth presented itself.

There are not many likable characters in the book. Mathieu cares enough for Marcelle to try to secure a safe abortion but has not the presence of mind to ask if that is what she wants. Boris proves himself callous and foolish – believing a close acquaintance has died it is disgust rather than grief that he feels. Daniel manipulates Mathieu, refusing to lend money he easily could and attempting to trap him into marrying Marcelle. He plays with their lives for sport and although by the end seems to have gained something of a conscience, the solution he suggests foreshadows misery ahead.

An interesting novel set in a time of great turmoil for Europe with characters largely too wrapped up in their individual concerns to involve themselves in the wider world. War is at the periphery however and gives insight into some of the characters. Those reading the novel in their late 20s/early 30s will recognize the turmoil of transitioning into ‘the age of reason’ and it will make you question your own moral compass.

Pick up a copy:
Foyles
Waterstones
Posted by Ramblings of a nobody at 17:37