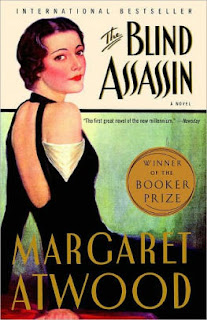 ‘Ten days after the war ended, my sister Laura drove a car off a bridge.’ So begins The Blind Assassin, the next six hundred pages explaining the circumstances that led to this dramatic action. The narrative is slightly complex in form – split between the present with Iris as an old woman, writing her autobiography of sorts. This  is interspersed with contemporary newspaper reports and excerpts from The Blind Assassin, a novel published posthumously under Laura’s name. Within this one of the characters tells the other stories and as we progress through the book it becomes clear the lives of these characters reflect those within Atwood’s novel.

Laura and Iris grow up in a wealthy family, their father having inherited the family’s factory business after his brothers were killed during World War One. When their mother dies in childbirth it becomes clear Iris will be expected to take up the role of heir. In an attempt to save the business she is married to Richard Griffen, her father’s main competitor and seventeen years her senior. Married life proves itself unpleasant, Richard’s sister Winifred is always around, controlling the minutiae of Iris’s life. She soon realises her role is just to ‘open my legs and keep my mouth shut’. Their marital relations are a particular source of dread for her as Richard ‘preferred conquest to co-operation, in every area of life.’ When Laura is forced to live with them she makes no secret of her intense unhappiness and eventually Richard and Winifred have her institutionalized. Iris is refused access to her sister and no letters or messages get through. There are many secrets embedded in their history, subtly hinted at throughout. It is only in its conclusion that the reader is shown in full the series of tragic events suffered by the Chase sisters.

The book is firmly set against the historical events affecting Canada at the time it is set – labour relations between the wars, the Great Depression, the personal implications of war, and the social pressures and patriarchy that created such unhappy lives for our female protagonists. The newspaper clippings show how superficial public concerns were and highlight events that Iris hasn’t yet told us about. When she does fill in the gaps she points to the inaccuracy of some reporting. As for Iris herself, how far can we trust her version of events? She is writing for the sake of her estranged granddaughter Sabrina, relies on memories of events that took place decades earlier. She also shows us her ability to successfully conceal truths in the confessions she makes. In old age she is penniless, bitter, and reluctant to accept help. Her organizing the publication of The Blind Assassin turned Laura into a martyr and she has no time for devotees of her sister. In youth resentful of the constant need to look after Laura and in old age feeling as though she is still living in her shadow, it is not unreasonable to think she may embellish her story.

This is a hugely interesting book that deals with a plethora of issues both familial and universal. Carefully plotted to keep you wanting more, each strand captures the imagination and gradually reveals more insight into the characters and the world they inhabit. Criticised by some as too black and white, there’s little ambiguity over who you should be rooting for. Nonetheless, Iris and Laura are expertly crafted, Atwood shows the roots of their future in the passages on their youth. As for Winifred and Richard, their manipulations and scheming will make your blood boil. A fantastic read that I didn’t want to end.

Pick up a copy:
Foyles
Waterstones
Book Depository
Posted by Ramblings of a nobody at 15:26