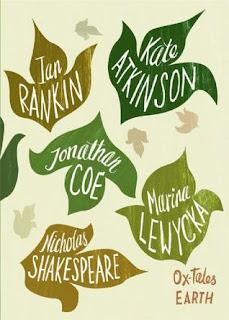 In 2009 Oxfam published four short story collections to raise money and awareness of their work. The first, based around the theme of Earth, contains stories by Ian Rankin, Kate Atkinson, Jonathan Coe, Marina Lewycka, Nicholas Shakespeare, Rose Tremain, Marti Leimbach, Hanif Kureshi, Jonathan Buckley, and a poem by Vikram Seth.  With such a varied and talented group of contributing writers there are certainly some treasures within. The theme is very loosely applied, more obvious recurring themes include death and relationships.

The book opens and closes with stories that feature famous names. The first, The Jester of Astapovo by Rose Tremain focuses on the stationmaster who looked after Tolstoy in his last hours. An interesting story about an event that previously I knew nothing of. The closing story from Nicholas Shakespeare weaves the story of a middle-aged African woman with the death of Marat. The president of her country runs a cruel dictatorship and so she aligns herself with Charlotte Corday, who took Marat’s life. It is an intriguing story that discusses how we embed our homeland in our identity and how even after we leave, it will always be a part of us.

In between you will find stories of struggling marriages, people who find themselves as outsiders of society, and parents struggling to connect. A stand-out for me was Boys in Cars by Marti Leimbach which discusses the difficulty for a child with autism to attend a birthday party. The resilience of his mother and his determination to try are movingly written so that you feel the struggle, even in such a short space.

Overall a varied read. Not all the stories were entirely captivating but almost all will make you feel something.
Posted by Ramblings of a nobody at 13:36