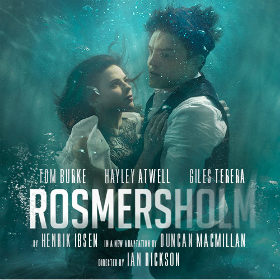 Ibsen’s 1886 play Rosmersholm is rarely revived but in Duncan Macmillan’s masterful new adaptation we see how remarkably relevant it remains. After the death of his wife, Rosmer’s ancestral home lies dormant, her favourite room left to decay. Grief-stricken Rosmer (Tom Burke) has withdrawn from society, relying on the company Rebecca West (Hayley Atwell), his wife’s former companion. Their bond has grown strong and Rebecca has shared her radical views with him, allowing him to see the possibility of a world beyond the straight-laced, pious life he has lived in the dreary house he has come to hate.

On the eve of an important election Rosmer reveals to his sternly right-wing brother-in-law Kroll (Giles Terera) that he has lost his faith and begun to see the potential for radical change. Kroll is horrified and threatens to smear his name in the press if he comes out in favour of the opposition.  This is not the only time the use of the press to manipulate popular opinion is alluded to. Kroll explains that politics is too complex for the average working man and ‘so the papers sell them a lie that it’s actually very simple. That it’s not about facts, it’s about feelings’, and so ‘they get duped into voting against their own interests.’ In the current polarized political state of Britain where emotion has been ramped up to the extreme, this feels painfully pertinent for a play written over a hundred years ago.

Rebecca is an intriguing character – confident, intelligent, and holding herself to impossibly high standards, she is, as Kroll declares in disgust a ‘liberated woman’. Women do not have the vote, are not expected to take an interest in politics, and yet she can hold her own. Kroll may not like it but he does recognize her power, threatening to publicly embroil her in scandal.

The set design is beautifully realised. Rosmersholm gives the sense of claustrophobia and stifling history. At the beginning of the play it is in darkness, paintings covered but gradually it is brought back to life as Rebecca encourages the light back in and adorns the room with flowers. We come to learn of the importance of the building to the local community and the burden Rosmer has always felt living there. Events within do not only concern its inhabitants but all around it. This sense of being trapped in a system he can’t stand, the responsibility of the family name and its dark history that he can’t convince others to care about, ultimately lead him to distraction.

Rae Smith’s thoughtful designs create real atmosphere and extra punch to the closing scene. Atwell’s Rebecca is composed yet capable of high emotion. Wracked with guilt at the path events have taken, she is a troubled character. Burke plays a conflicted John Rosmer and Terera is brilliant as Kroll. An excellent production that is running until 20th July.
Posted by Ramblings of a nobody at 16:36