Dynasty: The Rise and Fall of the House of Caesar, Tom Holland 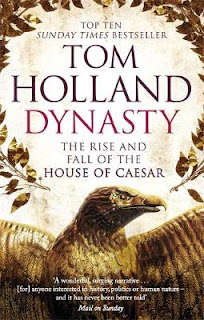 Holland’s book on the Julio-Claudian dynasty has the pace and interest of a novel, making it easy to forget you’re reading non-fiction. We are swept through the dangerous and erratic lives of the most powerful men in the world at the time, interlaced with Rome’s origin myth and broader historic notes such as the ability of descendants of freedmen to rise through the ranks. Coming to the topic as a novice, it makes for an entertaining, engaging read.

The history of ancient Rome’s ruling elite is bloodstained and full of intrigue at a time when having even a vague claim to power could leave you with a slit throat. Holland highlights both the impact that the wolfish origin myths had on the Roman psyche, creating driven, violent men, as well as the popularity of gossip and rumour. These rumours are passed down to us with little dissection, whether they are true or not playing second fiddle to the melodrama. It is a valid point however, that even if not true, it is telling that citizens would believe their ruler would set fire to the city in order to make way for a palatial garden, for example.

There are moments where the subjects seem somewhat more relatable – Tiberius’ sorrow at his forced divorce from a wife he loved for a more politically beneficial match, or Claudius’ rejection by his family for his misfortunes from birth. Sympathy is short-lived however as they proceed to murder, rape, and generally abuse their power. None more so perhaps than the last of the dynasty, Nero, whose grief at the death of his wife (by his own hand…) led him to castrating a young boy who resembled the deceased and forcing him to act the role of wife for the rest of his life. Deranged as these behaviours are, and as much as this may seem like a male-dominated tale, there are plenty of ruthlessly ambitious women scheming to manoeuver themselves and their offspring into positions of influence and power.

A very readable introduction to one of history’s most infamous families. The narrative style is occasionally a little odd as it seems to mingle assumed thoughts of the classical figures with Holland’s narrative voice. Not the most probing of historical accounts but one that encapsulates all the drama, excess, and treachery of a family desperate for power.

Pick up a copy here.
Posted by Ramblings of a nobody at 12:00