The Woman of Rome, Alberto Moravia translated by Lydia Holland and Tami Calliope 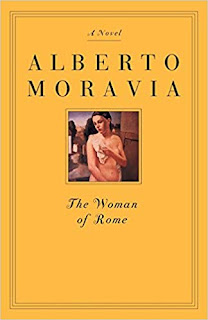 Moravia’s 1949 novel tells the story of Adriana, a young woman who lives in a poor area of Rome with her mother. At sixteen she has grown to be beautiful and her mother believes this will be their way out of poverty. She takes her to an artist to pose nude and encourages her to become a prostitute, a more lucrative trade but one that runs counter to Adriana’s dreams of marriage and raising a family. It is not long before she falls in love, and although we know it won’t work out (the narrator is an older Adriana who drops in snippets of information she has gained through the years), she is completely wrapped up in the idea, much to her mother’s distress. Her model friend Gisella tricks her into spending time with Astarita, a man completely obsessed with her. The events of this meeting are the catalyst for a change of direction for Adriana and she comes to crave the freedom of not being beholden to any man. Her new life brings her into contact with hardened criminals, a new love, and Astarita, although she has learned to use his insatiable lust to her advantage.

She speaks of how the denial of things she wanted as a child while living in close proximity to Luna Park, a fairground that she desperately wanted to visit, led her to feel as though she is locked out of a world of happiness. It’s also hard for her to feel her self-worth, settling for men she knows don’t love her. This is rooted in her relationship with her mother who has told her repeatedly that she was the ruin of her. She had not wanted to become a mother and when she fell  pregnant it was the end of her prosperity and happiness. Adriana is sympathetic, believing that her behaviour is an attempt to protect her from the same fate.

Adriana’s life lacks positive relationships. Gisella facilitates her rape in what is an incredibly uncomfortable scene, blaming her afterward by claiming it wouldn’t have happened if she hadn’t wanted it. Astarita believes himself in love with her but degrades her, showing little respect for her as a person. Her first love, Gino, lies to her. Giacomo, her second love, does not pretend to love her but continues their relationship. Other men she encounters use her one way or another. There are many times that it’s easy to feel sorry for Adriana but there’s much to dislike in her personality. She becomes fickle and enjoys the suffering of others. There’s something about the way she is written that feels false, as though the author hasn’t successfully encapsulated the reality of life as a woman.

An interesting read, at times gripping, but the style of writing does not flow all that easily. This could be a result of translation, or a deliberate device to show that it is Adriana who is telling us the story.

Pick up a copy here.
Posted by Ramblings of a nobody at 13:52