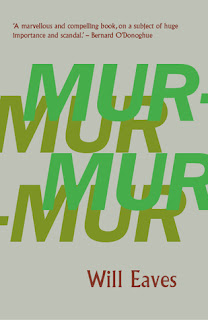 Alec Pryor's story uses Alan Turing's life as inspiration in Eaves’ latest novel. The character worked at Bletchley Park and is undergoing chemical castration for engaging in homosexual activity. We know that Alec is a doppelganger for Turing but Eaves is clear that there was a purpose for this slight separation of historic figure and fictional character. He did not want to attribute words and thoughts to Turing that he would likely have rejected. The characters in the novel have a life of their own while shining a light on history.

The structure jumps around in time and style. At times we are taken back to his school days and first love – Christopher Molyneaux who died tragically young. We see him in dreams and flashbacks, the memory of him haunting Alec still. There are also letters between Alec and his ex-fiancée June. Intimate, honest letters that show the depth of their friendship and mutual respect for each other’s intelligence. We see in flashbacks his proposal and the transparency of their relationship – he was honest with her about his sexuality and expectations, not wanting to trap her in an unfulfilling marriage.
There are musings on his change of appearance caused by the injections. He seems barely recognisable but knows, deep down, that it doesn’t change who he is, and acknowledges the strangeness in seeing our own reflection, that there’s also something between it and reality. He approaches his treatment intellectually, almost as though he sees it as a research opportunity, he doesn’t rail against the injustice of it.
Another theme that recurs is that of personal responsibility. He comments that the nurse who injects him is able to separate her actions from the result as someone else has ordered it, she is just doing her job. Later Eaves writes ‘pain is memory without witness or corroboration. It isn’t real to anyone else, and that is what allows torturers, including governments, to be torturers. They can pretend it isn’t happening because it isn’t happening to them.’ In interviews Eaves has spoken of the importance of including Turing’s interest in psychology and philosophy in the novel, areas of his intellectual life that are not commonly known. They are carefully woven into the narrative, making the reader think more broadly about human behaviour.
An interesting read whose prose is almost poetic at times. One to read if you like your fiction to leave you with lots to mull over.

Pick up a copy here.
Posted by Ramblings of a nobody at 21:55