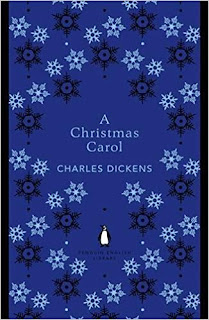 Dickens’ most famous Christmas tale is a warning against greed and a reminder that money doesn’t buy happiness. In his characteristic style, he brings Victorian Britain to life skilfully, with some dark humour running underneath. In such a short story he succeeds in creating believable characters and drawing out the traits them make them so memorable.

Scrooge is a miserly figure, universally disliked (although some do try) for his lack of generosity and dismissal of those closest to him. He finds no comfort in his wealth, keeping himself in discomfort to save money. He is the epitome of the futility of hoarding wealth for the sake of it. Through the visits of the three ghosts we learn more about his behaviour and some hint at what turned him into the cold, unloving figure that we know him as.

The Cratchits on the other hand are full of life and love despite their meagre income and the health problems that haunt them. Dickens’ character sketches are such that we feel for them almost instantly. The juxtaposition of Scrooge’s solitary, cold life and the affection and joy shared in the company of loved ones in the Cratchits is stark.

A cautionary tale for those in a position of privilege, it encourages a softer, more gentle approach. Scrooge realises how callous his own attitude to the poor is and comes to regret it. Dickens was originally planning to write a pamphlet in response to the horrifying facts revealed in the Children’s Employment Commission report. His choice of fiction instead has meant that his words and message have endured through the ages and remain relevant and heartfelt into the twenty-first century.

A short yet powerful book, and a great one to pick up if you want to give the classics a go.

Pick up a copy here.
Posted by Ramblings of a nobody at 18:22