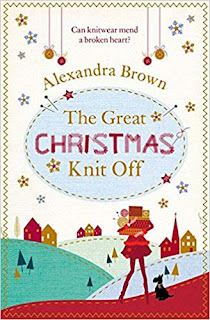 It’s been seven months since Sybil’s husband-to-be ran off with her twin sister, leaving her humiliated and heartbroken at the altar of their Star Wars themed wedding. Life since has been a struggle and when it seems she’s made a monumental mistake at work she realises she needs a break. Her best friend has just moved to the picturesque village of Tindledale and before she has time to think twice she’s on the next train out of London. Here she’ll find a close-knit community who rally around in times of need but aren’t too keen on outsiders. It soon becomes clear that not only can she heal her own broken heart but make a real difference to the locals too.

This book is every bit as cosy and predictable as it sounds, although Brown does add in a few mysteries to keep you turning the pages and to round out some of the supporting characters. Unfortunately, I had trouble getting into the story, partly because of the frequent poor quality of writing and annoying habit of using phrases such as ‘does a laugh/snort/smile’ rather than simply saying a character smiled. The dialogue is at times stilted and unnatural and occasionally leaves you feeling lost. The over the top comparisons with London rely on exaggerated stereotypes and quickly began to grate.

However, once you’ve got used to the writing and are far enough in that it becomes unnecessary to continue to add background information, often wedged in awkwardly, it becomes quite enjoyable. Sybil befriends the elderly owner of the local haberdashery shop and takes great pleasure in helping to spruce things up, having a long held dream of making a living from her craft. She soon finds herself settling in, making a big impression over one long weekend.

Predictably, there’s also a new love interest but this is a subtle thread and doesn’t dominate. The focus is on the friends she makes and the knitting project that brings them all together. It’s great to see the mental health benefits of activities such as knitting portrayed so enthusiastically.

Sybil is both narrator and protagonist and although she does naturally dwell on her disastrous wedding, a lot of events are passed over quickly. It is mentioned that a number of other characters have experienced trauma but they put a brave face on and very little is made of their stories – some threads feel superfluous as they have no impact on the story itself and nothing is made of them after the initial mention. As the first in a series set in Tindledale however, it’s very possible they are developed further in other books. Despite its flaws, you do find yourself being swept along and ultimately rooting for things to turn out well. The chatty writing style makes you feel as though a friend is recounting a series of events to you, making for an easy read for when you’re looking for some feel-good entertainment.

Pick up a copy at:
Foyles
Waterstones
The Book Depository
Posted by Ramblings of a nobody at 12:00