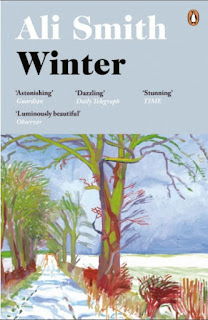 Art works for a security company, spending his days trawling through the Internet trying to find copyright infringements, snuffing out the spread of small artists’ creative work. In his spare time he writes a nature blog, posts about imagined walks and encounters with nature, constructed via the internet instead of genuine experience. His girlfriend, Charlotte, tired of his apathy, leaves, smashing his laptop and hacking into his Twitter account to post fake news designed to discredit and embarrass. It is this which leaves him desperately in need of someone to take to his mother’s at Christmas. A fortuitous meeting at a bus stop provides him what he needs and he soon finds himself traveling to Cornwall with Lux who, he pays to pose as Charlotte.
We soon come to realise that his deception is not the only one. His mother Sophia and her sister Iris can’t agree on what happened during his childhood, who looked after him and when. The reader is never quite sure which account to believe but you’ll likely find yourself naturally leaning toward one. Iris is an activist and thinks of herself as a citizen of the world. Sophia can’t understand her lifestyle and dislikes immigrants, yet seems to trust Lux, originally from Croatia, more than her own family. Lux is refreshingly honest, intelligent, good with people, and subverts racial prejudices. She helps Art to see the ridiculousness of the government’s actions, sending out boats to intercept rescue ships sent to help migrants in trouble in the sea. The last section of the novel highlights the cruel way bureaucracy treats people, preferring to eject those who need help, blind to their humanity.

The novel is full of contradictions. Sophia is rigid and resistant to emotion yet has no trouble imagining a head around her home, ghostly yet containing no horror to her. She is a modern day Scrooge, resenting the intrusion of her family and refusing to eat any of the Christmas dinner Iris prepares for them.
The novel has an otherworldly feel to it yet remains unashamedly political. Ali directs her characters to highlight the folly of isolationism and reminds us that people are not mere statistics. She plays not only on the political challenges of the day, and indeed those of the past, but also the way we replace real life interactions with screen time and armchair activism. As always, she holds up a mirror to the absurdities of the day and encourages a more compassionate worldview.
Pick up a copy:
Foyles
Waterstones
Book Depository
Posted by Ramblings of a nobody at 12:00