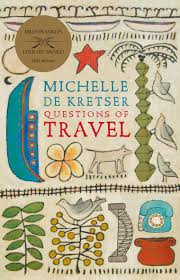 De Kretser’s sweeping novel gives us glimpses into the lives of Ravi and Laura from the 1970s through to 2004. The early decades fly by while the later chapters take more time, reveal more of their lives. Laura, a young woman from Sydney, follows in the footsteps of many who have felt the tug of wanderlust, travelling around Europe, never really settling. She’s aware of the futility of her endeavours, of the predictable and shallow experiences, yet feels at a loss when she finds herself outside the guidance of her travel book. Ravi, growing up in war-torn Sri Lanka, finds himself travelling for entirely different reasons, not ones of indulgence but necessity.

There are rich, evocative descriptions of the countries and cities that the characters visit. Laura seems to always be yearning for more, for a deeper encounter with other cultures while realising how superficial most travel is.

It was simply wonderful how away confirmed that home was best. Photographs were produced as evidence that travel had occurred, for the travellers themselves were unchanged. Souvenirs, strategically displayed around the house, proclaimed the sophistication and broadness of outlook that familiarity with foreign cultures conferred. And that was all of overseas that anyone needed.

Ravi intuitively approaches Australia openly, absorbing the mundane, enjoying the fast food and freedom of sitting and watching the world go by. When working for a travel guide publisher the suggestions he makes for places to be included in the Sydney guide are places where visitors would be able to see the breadth of cultures that the city nurtures, the normal lives of its inhabitants. He is gently told that people don’t want to see the ordinary, they want the landmarks and the iconic sights while still feeling that they’re having a unique experience. Most people join the company because of a love of travel but soon accept the cynical truth.

The sense of belonging is also a recurring theme. Laura finds herself moving around, trying to find somewhere that she feels she belongs without allowing herself time to lay down roots. She acknowledges that when she dreams of places she’s been it’s always the same – a warm evening in Sydney, a rainy afternoon in London. In reminiscence and longing the variety and drudgery of reality are lost. Ravi, having been forced away from his once stable life has mixed feelings about both his new home and his old. He realises he is afraid of staying but also afraid of going back.

Their relationships also play a role in their sense of self. There are the fleeting encounters and the unkept promises, friendships full of love that turn into people you want to avoid, and those you’ve never liked but find yourself reliant on. The nature of friendship and familiar love follows them through their lives, shaping them and sometimes arising in them. There is a sense for both that they are ultimately alone.

Politics plays its part too, not just in its displacement of people but in the reactions of those they encounter. Ravi is a refugee in Australia and although he is considered the ‘right kind’ on account of having arrived by plane rather than on a boat, he experiences the negative attitudes, the expectations. His colleagues are disappointed that his grief and trauma aren’t performative enough. They do not truly try to get to know him, and their unthinking remarks show a lack of compassion. He is not quite what they want him to be.

This is a vast book spanning continents and decades, the writing is indulgent and evocative. What at first seems a wandering tale of ordinary life has moments of potency. De Kretser is a sharp commentator on the state of the world and draws believable characters, resisting the temptation for neat coincidences and a tidy ending. A book that will absorb you and throw off your expectations.

Pick up a copy:
Foyles
Waterstones
Posted by Ramblings of a nobody at 22:01