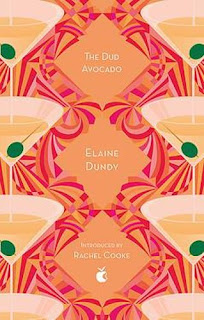 Sally Jay Gorce is a young American in 1950s Paris, finding her way through the busy streets, cafés full of students having lively debates, and of course, falling in love, having affairs, and generally living life to the full. We first meet her in the morning, wearing an evening dress because she’s been unable to successfully retrieve the rest of her clothes from the laundry. She bumps into Larry, an old acquaintance, and instantly finds herself under the pressure of sexual desire. Unfortunately, mid-conversation, her lover, Teddy, a married diplomat, arrives and she has to make her excuses. We are instantly welcomed into her whirlwind of a life in which she finds herself constantly feeling out of place. Her voice is strong, humorous, naive, and oh so relatable. It is not the story itself that keeps you hooked but Sally Jay’s distinctive voice - think the endearing, lively voice of Cassandra in I Capture the Castle mixed with the humour and worldliness of Bridget Jones’s Diary.

An aspiring actress, Gorce leaves a stable relationship for the chance to be in a film. Unfortunately, it turns out she is mostly needed to help the star with his English. Undeterred, she throws herself into the experience and enjoys the proximity to Larry that it affords. It is during this time that things begin to unravel and she sees people for who they really are. ‘That’s the story of my life. Someone’s behaviour strikes me as a bit odd and the next thing I know all hell breaks loose.’ We see this to be true several times throughout. Her innocence and hopefulness often blind her to the schemes of others, but when the time comes she’s more than able to hold her own.

Despite the light feel to the book, even amid some of the more serious encounters, there is a critique of the role of women, and a desire to be taken seriously. She is surprised to discover the expectation that she knows how to cook, sees that cooking and cleaning is the lot of other women but doesn’t see why it should be her fate too. Earlier in the novel, after an upsetting altercation with Teddy she comments ‘I reflected wearily that it was not easy to be a Woman in these stirring times. I said it then and I say it now: it just isn’t our century.’ This realisation doesn’t keep her down however, her insatiable zest for life moving her on to the next promising opportunity.

Gorce is a charming protagonist - honest and amusing, she doesn’t hold back. The writing is clever, conversational, and brilliantly astute. Sally Jay feels completely real and refreshingly candid, she’s a great character to spend some time with.