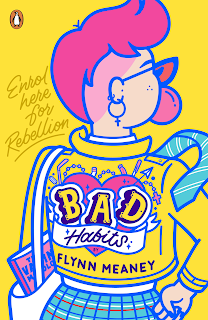 This post is part of the blog tour for the novel. Thanks to The Write Reads and Penguin for providing me with a free copy of the book in exchange for an honest review.

Alex Heck is embarking on her junior year at St. Mary’s Catholic School, a boarding school hundreds of miles from home with some very conservative values. There’s nothing she’d like more than to get herself expelled, her file of misdemeanours already overflowing with reports. Unfortunately for her, her dad is determined she should complete her time there and so she tries to come up with an idea so outrageous they’ll have no choice but to expel her. Putting on a production of The Vagina Monologues with the five other members of The Feminist Club seems like just the ticket, but she will, naturally, come up against a lot of resistance.

Her attempt to put on the play does run throughout the novel but isn’t really the main focus, rather a vehicle to discuss the problems that arise from living such a repressed life. It becomes clear that their sex education is severely lacking, and her sweet roommate Mary Kate can’t bring herself to say the word vagina or buy tampons (her mum posts her a supply). Alex has become the unofficial counsellor to her peers, being the person everyone goes to when they have a problem they can’t discuss with the nuns that watch over them. She may come off as brash and self-centred at times, but the messages about not being ashamed of the female body, and the right to have autonomy over what happens to it are important, and relevant to readers of any age.

Alex starts the novel very deliberately acting out and blowing situations out of proportion to make a point. Her quest for inequality does’t feel genuine but more an excuse to stand out and ruffle some feathers. Her outright dismissal of those who don’t hold the same views as her or who conduct themselves differently can make it harder to like her and undermines her pro-choice stance. However, as the novel progresses and she spends more time around groups she would usually avoid, it becomes clear that the stereotyped view she’s taken of them is often inaccurate. We begin to see the events that lead them to form the opinions they have, and although Alex is reluctant to admit she was wrong, there is some slight concession that other people can have a valuable input in the conversation, even if she still thinks her views are superior.

The boarding school setting is an ever-popular sub-genre of children’s and YA books, and Bad Habits gives it new life. It’s not all midnight feasts and hockey sticks at dawn, Meaney explores the struggle that Alex and some of her peers experience in trying to make sense of why their parents have sent them away. We see in the opening chapters how distant her own parents are and her dad, a St. Mary’s alumnus, refuses to admit what was right for him might not be for his daughter. Later in the book, when her mindset is beginning to shift, we see also how she has struggled splitting her life between California and school, completely separate from her ‘real’ life. The struggle to maintain friendships amid the disorientation of everything that’s changed while she’s been away during term time will be a familiar feeling for anyone who’s ever had to move away from their main support network.

This is an enjoyable read with a serious message amid the madcap schemes of rebellious teenagers and strict school rules. It’s written in such a way that we get Alex’s impressions of the other characters but can also see things that she is blinded to, offering us the opportunity to form our own opinions. The action takes place over only a few months but we see huge growth in many of the characters. That the side characters are also afforded the space to develop makes this a well-rounded read.