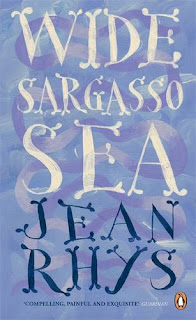 Hailed as a feminist, post-colonial prequel to Jane Eyre, Rhys’s Wide Sargasso Sea gives a voice to the ‘madwoman in the attic’. Split into three sections, we witness Antoinette’s life before she met Rochester - wealthy but shunned by her neighbours, racial tension simmers. The second section reveals events from Rochester’s point of view in which he is variously accused of marrying Antoinette for her money and warned that he has in fact been tricked into marrying into a family with a history of poor mental health. The final, short section reveals the sad life forced upon Antoinette, locked in a room with only Grace Poole for company. We see the result of Rochester’s harmful behaviour, and for many readers this changes their views on the conclusion of Jane Eyre.

There is a sense of displacement, of living between worlds throughout. Antoinette and her family suffer for the ills of the recent past. She desires friendship but experiences rejection on numerous occasions. Rochester too expresses disorientation and has a clear lack of understanding of local custom. He is also callous in his behaviour toward Antoinette, refusing to call her anything but Bertha, attempting to erase her reality. We see the cruelty of removing her from her home, taking control of her wealth, and refusing to allow her even a room with a window she can fully see out of. So disoriented does she become in this prison that she can’t believe she is truly in England. She becomes increasingly disconnected from herself, unable to remember events clearly, and becoming fixated on the red dress that she links to her identity.

This is a short but intense read. Authors reimagining other writers’ characters is a tricky business, and many attempts fall short. Here Rhys has created a tale compelling to read whether you’re familiar with Jane Eyre or not. The themes and stylistic choices offer food for thought, and knowing the inevitable fate of Antoinette from the off can add a further layer of emotion. Rhys makes the characters come alive afresh, offering an alternate view of events in giving voice to the silenced.