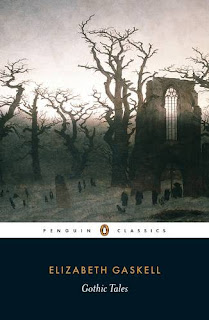 Better known today for her social novels, Gaskell was popular in her day for her ghostly, gothic short stories. In this collection, modern readers are given the opportunity to read a selection of them. From traditional ghost stories to historical fiction and tales of brutal marriages, this is a varied collection, but one with some recurring themes.

Gaskell plays with the idea of past sins cursing future generations. In The Doom of the Griffiths we see how a curse haunts a family for many generations. It was destined that a son would kill his father, breaking the curse. The younger generation feels hopeful and as though there’s a chance of happiness, but, inevitably, things take a turn for the tragic. The Old Nurse’s Story explores guilt and its consequences as the youngest member of the Furnivall household is put in danger because of the wrongs of her elders. It is a truly unsettling ghost story in which a chilling sense of unease will envelop you. The Poor Clare also deals with wrongs being done to an innocent, yet this time the perpetrator is also a victim in a heartbreaking twist.

The prevailing theme of these unhappy tales is the damage male privilege and violence does to those around them, the suffering often falling upon women. In Lois the Witch a young girl is accused of being a witch during the Salem Witch Trials, with everyone so convinced of her guilt that she begins to wonder herself. However, we see the consequences of her rejection of her infatuated cousin and it reminds us of the many ways in which women have been manipulated and controlled through fear and powerlessness throughout history.

The final story in the book, The Grey Woman, features an abusive husband, an unwilling bride, and a desperate attempt to escape once the depth of the husband’s depravity is revealed. It is a claustrophobic, upsetting read in which the trauma of her life leaves the ‘grey woman’ afraid to leave her home and aged well beyond her years.

Family dynamics are explored in a number of the tales. The Crooked Branch shows a son who has been doted on go bad and betray his family and love. You read with regret as they continue to blindly support him, believing he will come back to them. Their good-hearted trust is difficult to read, knowing that it will not be repaid with kindness. Sibling rivalry and an attempt to win favour causes the curse that befalls the family in The Old Nurse’s Story. The judgment and lack of compromise brings far more suffering on them than the consequences of an open mind ever would have.

An interesting collection of stories featuring many familiar gothic and horror tropes. Some tales send a chill to your spine, others don’t hit the mark. Emotions are sure to be stirred by these sad stories that often rely not on the supernatural but on the cruelty of our fellow humans. This sense of realism injects them with yet more power.

Posted by Ramblings of a nobody at 19:49