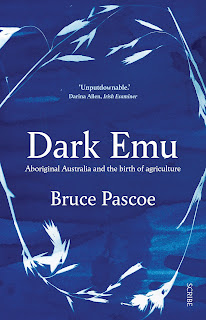 Pascoe’s divisive re-assessment of pre-contact Aboriginal lifestyles looks at the ways in which they worked the land, and the horrifying deterioration of once prosperous land after the European colonists arrived. His source material largely derives from journals and reports by the colonists. These naturally contain a lot of bias, but Pascoe believes if we look beyond the colonial gaze we can see evidence of sophisticated agricultural systems.

He writes of the evidence of harvesting practice and the storing of excess food. The colonists commented on the apparent presence of land that had been ploughed and rolled, with evidence of the tools that were used for the task. The farming of kangaroos is touched upon, alongside discussion of the sustainable way the land and animals were farmed. Pascoe speaks about the many examples of tools and other crafted items, such as clothes, rarely being displayed in museums, and the incorrect labels that are attached to them when they are. It seems that the prejudices of the past have filtered down to today, blinding us to the achievements of the Aboriginal people before the first colonists arrived.

His narrative is a painful reminder of the horrendous acts of those who went to Australia and claimed the land as their own, killing and destroying with seemingly no thought as to the lives they were taking and displacing. Indeed, Pascoe claims that one of the reasons there’s so little evidence of the villages and agricultural systems is that the destruction was so swift and complete that by the time the settlers arrived there was nothing left to suggest to them that a prosperous society existed before their arrival.

Pascoe discusses the farming practices the Europeans brought to Australia which damaged the soil and made it far less productive. They did not try to learn from the Aboriginal people but instead attempted to replicate the type of farming they were used to. Pascoe believes this to have lasting implications for the Australian economy and its food production. Many native plants all but went extinct under the strain of these foreign farming techniques. Settlers were also reluctant to burn land as part of its management, which Pascoe argues has contributed to the prevalence of damaging wild bush fires today.

It is a convincing argument, and one that makes the reader re-consider the snippets of information we are taught about the Aboriginal people. However, it has received a lot of pushback, most notably in Peter Sutton and Keryn Walshe’s Farmers or Hunter-Gatherers? The Dark Emu Debate in which they argue that being a hunter-gatherer is not something to be looked down upon. Hunter-gatherers do not wander the landscape aimlessly but rather know which areas provide what they need at different times of the year, travelling accordingly. They believe Pascoe’s argument attempts to make the Aboriginal people appear more European, which is not a positive strategy for re-assessing a difficult history. They take issue with his focus on colonial sources and lack of interaction with knowledge keepers in Aboriginal communities. Not only could the sources be more diverse, but they also point to a number of examples where he doesn’t include full quotes, ignoring passages that don’t fit neatly with his narrative.

This is a thoroughly fascinating and accessible read that encourages the reader to consider their assumptions. It discusses the ways in which Western ideas of civilisation have been perpetuated to excuse past actions around the world, giving us food for thought on the lens through which we form our opinions. Worth reading, but equally valuable to look into the counter-arguments and problems with Pascoe’s approach.

Pick up a copy:
Bookshop
Foyles
Waterstones
Posted by Ramblings of a nobody at 16:34